Make your own Shamrock Shake with a touch of alcohol for St. Patrick's Day! 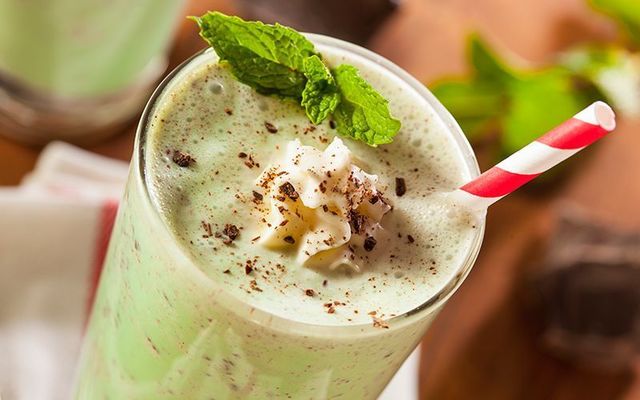 Make your own Shamrock Shake with a touch of alcohol for St. Patrick's Day.

(This recipe is just for the adults! Enjoy responsibly!)

It's McDonald’s legendary Shamrock Shake time, aka St. Patrick's Day, but we thought you might want to try to make the famous mint green concoction yourself.

But it isn't just for March 17! When you think about it, March isn't a great time to be drinking shakes so keep using this recipe well into the summer months to enjoy it to the utmost.

Here’s a grown-up version of the McDonald's Shamrock Shake you can make at home for your St. Patrick's Day celebrations.

Throw ice cream, vodka, and crème de menthe in a blender and mix until it’s just evenly combined. Make sure not to over-blend. If you do, just add more ice cream.

Here's some history about the classic McDonald's Shamrock Shake:

The Shamrock Shake was developed in 1970, according to McDonald’s. It was created to raise money to buy the four-story house which would become the first Ronald McDonald House.

When Philadelphia Eagles tight end Fred Hill's daughter was diagnosed with leukemia and began treatment, the family had to camp out in the hospital waiting rooms in hospitals. They saw other families doing the same and realized that many families traveling long distances to visit sick family members needed a place to stay.

Hill and his team decided to raise funds for the project. Jim Murray, the team’s general manager, called a friend who worked in McDonald's advertising and suggested the team take part in the next promotional push. It just happened to be St. Patrick's Day.

Rogers Merchandising in Chicago created the drink, with James Byrne, the executive artist at the firm, using a family recipe for the shake.

What recipes do you like to try for St. Patrick's Day? Let us know in the comments!