IrishCentral Contributor Patricia Killeen reflects on the impact that Msgr. Hugh Connolly, a native of Co Down, has had on the Irish community as he's been reassigned from his post in Paris, France. 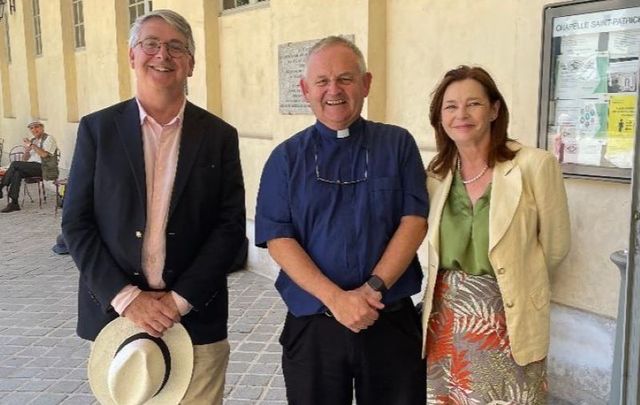 Although born a Catholic, due to personal reasons/hurts, I tried the Protestant interdenominational American Church in Paris (ACP), where male and female pastors are talented orators.

However, the ACP is bereft of votive candles, statues/paintings of saints and comes with a Protestant “tithe” system. I don’t mind contributing, however, paying a recommended 10% of gross salary didn’t appeal either to my Irish psyche where famine ghosts still rode, or to my pocket.

When at a crossroads in life, I find myself drawn back to Saint Patrick’s 18th-century Irish chapel in Paris, inhaling that wonderful, woody, incensey smell, enjoying the community, and the saints smiling benignly from the walls.

The first time I attended the Irish chapel in Paris was back in the early 1990s. I was writing a story for the Paris Voice, my first ever byline. I had an appointment after mass to chat with chaplain Father Liam Swords (1937-2011). I hadn’t imagined the effect that mass would have on me. Tears streamed down my face. Button pushing sermon? Nostalgia? Regret?

After mass, I went to the pub with Father Swords, who was also a writer, a historian and the producer of RTE’s Radharc. He confided that he was afraid of going back to Ireland, apprehensive that the food and weather would kill him. He returned in 1995 and only died in 2011, so I’m hoping it wasn’t the food or weather.

Before his death, he established a foundation to help Irish students spend time in Paris. The Liam Swords Foundation offers a grant to an Irish student/researcher to spend up to three months in Paris, resident in the Centre Culturel Irlandais, as part of their studies, and to fulfill their dreams.

I don’t know all the Irish priests who have mirrored my decades in Paris, as during periods, like certain French Catholics, I only show up for baptisms, weddings, and funerals.

Msgr. Hugh Connolly, from Co Down, was appointed to the chaplaincy in Paris in 2017. Father Hugh, as he’s known by the Irish in Paris, has accompanied the Irish community in Paris through lockdown and out the other side. I think he must have signed more passport applications and mass cards than any other Irish priest abroad.

He attracted people in droves. I met a young American attending mass during Covid restrictions. From behind his mask, he explained that he’d checked every single Christian Anglophone church in Paris, and had made his pick; Fr Hugh gave the best sermon.

Now the thing about Paris is, if you live here long enough, you can’t help but delight in a good argument, discussion, or oration. For the French, philosophy has been compulsory in the Baccalauréat (the equivalent of the Irish Leaving Certificate) since 1801. When someone stands up to speak in Paris, whether on a podium or a pulpit, they have to know how to hold their audience.

In my limited experience, compared with pastors or rabbis I’ve come across, I haven’t always found Catholic priests to be in the same oration league. However, Fr Liam Swords and Fr Hugh have been two definite exceptions.

This Sunday, I had both the pleasure and the sorrow to assist at the going away mass (and barbeque) for Fr Hugh after his five years of service in Paris. He officiated in front of a statue of the Blessed Virgin, before which Daniel O’Connell (Ireland's “Great Orator”) prayed when in Paris.

The mass was centered around The Parable of the Good Samaritan. Fr Hugh was assisted by Sean Ryan, a long-standing member of the Irish community in Paris.

A good sermon or lecture makes you both sit on the edge of your seat, along with giving you something to chew on. Fr Hugh has a love and knowledge of theology, of course, but also of culture, philosophy, linguistics, numerology, geography, topology, and his talent for putting things into context. Funnily enough, that’s what Jesus also excelled at, “great storytelling”, through his parables.

As we know, the story of the good Samaritan goes that when a law expert tried to trick Jesus into explaining further "Love your neighbor as yourself’” with the disconcerting question “And who is my neighbor?” Jesus told how a Samaritan (a native of Samaria, people regarded as heretics and Skizziks) was the only one to help a man waylaid by bandits and left half dead on the Jerusalem to Jericho road. A respectable priest and a Levite (a lesser cleric) had both seen the prostrate man but both passed by on the other side. Fr Hugh pointed out how Jesus, in revolutionary style, painted a person considered an anti-hero as a hero, and vice versa, thus blowing his own chances of continued popularity, longevity, and annoying even his own followers.

Jesus’s bottom and challenging line was that “your neighbor” is anyone who crosses your path in life. Fr. Hugh outlined that the route from Jerusalem to Jericho is a sheer descent, and because of that, back in the day, they had to have roads that zig-zagged, which they negotiated with their donkeys and carts. The zig-zagging layout of the roads created many corners where lone travelers were vulnerable and often waylaid. So the story, that I’ve known since childhood, is now updated in my mind, in a detailed and interesting context. I was also reminded that the word Samaritan, synonymous today with “a good person” right across the globe, wasn’t always a compliment.

There was also a cupla focal, the Ár nAthair etc., and the mass ended in a standing ovation not only for Fr Hugh, who said he felt like he was attending his own funeral, but also for the many children attending, some of who had drawn pictures during the mass.

After mass, in the cobbled courtyard, munching Tayto and Irish sausages in the sun, we incongruously found ourselves discussing the sermon.

Looking around at the crowd, I saw familiar faces including H.E. Niall Burgess, Ambassador of Ireland to France, accompanied by his wife. Burgess played an active role in the Irish peace process and participated in the Good Friday Agreement and is also a descendant of the 1916 Rising hero Cathal Brugha (Burgess in Gaelic).

This happy/sad occasion was so far removed from current thorny and valid questions confronting the US Catholic church. In a recent article, Archbishop Farrell of Dublin said, “the church needed ‘creativity’ to encourage young people to engage with their faith”. During Fr Hugh’s time in Paris, he made the chapel a place for the “young and old”, with his congregation including an unusually high number of young. On Sunday, there were children he’d baptized, young couples he’d married, and students and young workers drawn by the vibrant community spirit.

At sixty years old, Fr Hugh is a young priest by today’s Irish demographics which puts the average Irish priest’s age at 70. It also seems, along with creativity, “Ireland must be ‘land of welcomes’ for new foreign clergy” for the church to survive.

The people of Co Down are lucky to get a great shepherd back, and in Paris, although sad, we’re also looking forward to meeting a new Irish chaplain in September.