Irish watching the New Year's ball drop can take particular pride in knowing that the crystal ball is made by Waterford, the time-honored Irish company that began in 1783. 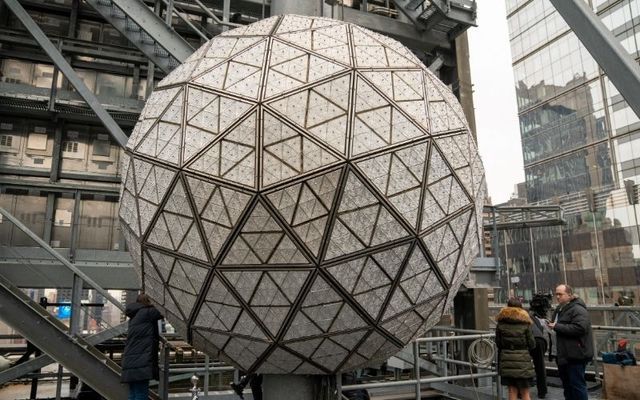 To ring in 2022, millions of people around the world will gaze from afar upon the famed New Year's Eve crystal ball as it makes its countdown drop to mark the new year in Times Square.

Irish diaspora watching the New Year's ball drop can take particular pride in knowing that the crystal ball is made by Waterford Crystal, the time-honored Irish company that began in 1783 in the Irish Viking town of Waterford and became world-famous for their exquisitely crafted crystal pieces.

In December 2018, a special Times Square New Year's Eve Ball event allowed lucky guests the chance to get up close and personal with the Waterford Crystal New Year's Eve Ball right after engineers had installed the new crystal triangles special for 2019.

A geodesic sphere measuring 12 feet in diameter and weighing in at nearly 12,000 pounds, the crystal ball is a sight to behold. It is covered by a grand total of 2,688 stunning Waterford Crystal triangles attached to 672 LED light modules capable of displaying a palette of over 16 million vibrant colors and patterns.

Each year, Waterford changes 192 of the crystal triangles for a new pattern communicating a symbolic theme to usher in the new year. The theme for 2019 was "The Gift of Harmony," with the signature crystal triangles featuring a band of harmonious cuts that resemble the notes musicians play - each distinct yet working together to form something beautiful and mesmerizing.

As Tom Brennan, second-generation master artisan for Waterford, told IrishCentral, the theme of harmony is especially pertinent for the determined, aspirational feelings associated with the New Year. "When you think about having harmony on a personal, individual level, it's all about having that balance of mind, body, and soul," he said.

"If you have that, it allows you to be a better version of yourself, and it spreads to everyone around you."

He shared his pride that, out of all the companies in the world -- the Fortune 500s, the tech giants -- a heritage Irish brand is at the center of it all when the clock strikes midnight on the new year.

"When you think of all the great exports Ireland has given the world - music, literature, food, and drink, Waterford Crystal is right up there. We began this process of making fine crystals in my hometown of Waterford in 1783, in the middle of the Georgian period,  235 years ago.

"And here we are in 2018 with the ball drop in just a few days' time. There's going to be 1.2 billion people around the world watching the ball drop, and Waterford, an Irish company, will be the most-watched brand on the planet. We're very proud of that."

Will you be watching the ball drop this year?