Happy Birthday to the coolest member of U2, The Edge 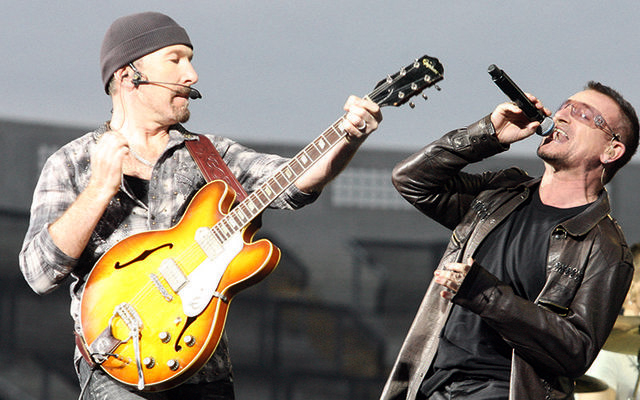 The Edge, aka David Evans, and Bono performing with U2 since 1976! RollingNews

The Edge, the lead guitarist and famed hat wearing member of U2, has been a member of the massively successful rock band since its inception in 1976 when a young David Evans, and his bother Dik responded to Larry Mullen’s advert on their high school notice board. Fourteen studio albums later U2 are still selling out arenas all over the world.

The Edge was born in East London on August 8, 1961, to Welsh parents. When he was one years old his family moved to Dublin, which he has called home ever since. During high school, at Mount Temple, in Clontarf, Dublin, the Edge and his fellow schoolmates formed a band which would soon become U2.

By 1980 U2 had released their first album, “Boy” followed by “October” and “War”. In 1987 they released “The Joshua Tree” and their fame and reputation was secured. The band went from strength to strength and are currently, 42 years after the band was formed, touring the world on the eXPERIENCE + iNNOCENCE Tour 2018.

Here’s a clip of The Edge and Bono performing their song “Stuck In a Moment” on David Letterman:

Here’s some quirky facts about The Edge to celebrate his birthday:

- How did he go from David Evans to The Edge? Way back in the 1970s Evans was re-baptized by Bono, who was then nicknamed “Bono Vox”, as The Edge.

The nickname was inspired by the sharp features of his face (see nose and chin) and his razor-sharp mind.

- The Edge love hats! In fact, he has only performed hatless on a handful of occasions. These include when he performed “Miss Sarajevo” at the 1995 Pavarotti And Friends concert and the video for “Discotheque”, in 1997.

- The Edge has five children. He married Aislinn O’Sullivan in 1983. They had three daughters. The couple divorced in 1996.

In 2002 he married Morleigh Steinberg, an American dancer who had performed in two U2 music videos and whom the band had employed during the ZOO TV tour. They have two children.

- The Edge lived in the Los Angeles house where Eric and Lyle Menendez killed their parents in 1989. Lovely!

Read more: U2 tune listed on Rolling Stone's top 100 songs of the century is the only Irish entry