Whether you’re looking for inspiration to plan a trip to Ireland or want to stoke some memories of places you’ve visited, there are so many movies, old and new, which can bring you on a virtual visit. 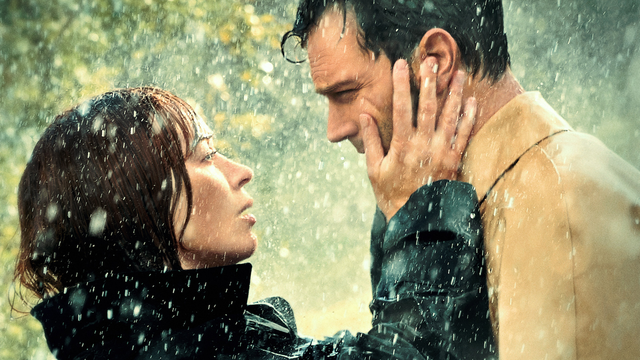 The stunning scenery, prehistoric sites and Georgian architecture of Ireland have played supporting roles in many movies. Deanna O’Connor takes a tour around film locations on the Emerald Isle.

The lush green landscapes of Ireland are admired all over the world. From the dramatic wave-lashed coastlines of the Wild Atlantic Way to the otherworldly rock formations of the Burren in County Clare, the geography of the island offers much to tempt the eye. Add to this what man has left behind: prehistoric sites with dolmens, stone circles and hill forts, and a reputed 30,000 castles and castle ruins dotted throughout the relatively tiny country. Then you have the contemporary cities with stunning examples of Victorian and Georgian architecture.

While all of this captures the attention of tourists, there are other visitors to these shores who have brought altogether more sophisticated camera equipment in their suitcases—the vast numbers of international filmmakers who have chosen Ireland as a filming location.

Of course, you may also have admired the background in many Irish productions which have received international acclaim over the years. Irish films which have shown off the natural beauty of the country to audiences around the world include Brooklyn, "The Wind That Shakes the Barley", "My Left Foot" and "The Quiet Man".

Whether you’re looking for inspiration to plan a trip to Ireland or want to stoke some memories of places you’ve visited, there are so many movies, old and new, which can bring you on a virtual visit.

Jamie Dornan, Emily Blunt, Christopher Walken and John Hamm decamped to Crossmolina, County Mayo in 2019 to shoot this movie based on the play Outside Mullingar, about a pair of lovers whose families are caught up in a bitter feud over a patch of land separating their two farms. While shooting took place mostly in rural locations in North Mayo, cast members were spotted out and about in the town of Ballina during filming. Ballina is famed as one of Europe’s best salmon fishing destinations. A stay in the grandeur of Belleek Castle and a visit to the Connacht Whiskey Distillery would combine to make a perfect trip to the area.

Starring Saoirse Ronan and based on the by Colm Tóibín, Brooklyn tells the tale of a young girl who emigrates from Ireland to New York in the 1950s and has to choose between her new life and love in America and returning home to a local suitor. The town of Enniscorthy, County Wexford was a key location for the Irish part of the film. The Athenaeum dance hall featured in the book and film and officially reopened as a theatre in 2016, after restoration. The building has a very special place in the town’s history, not just as the location where many a romance started, but also as a historical site of some importance for its role as the command post of the final garrison in Ireland to surrender during the 1916 Rising. The beach scenes were filmed at Curracloe Beach, which also served as a major location for Steven Spielberg’s Saving Private Ryan.

The Ken Loach war drama starring Cillian Murphy was shot around County Cork, in villages including Ballyvourney and Timoleague. In the town of Bandon, County Cork scenes were shot along North Main Street and near the Court House. A short trip out from Cork city could take in first Bandon and then Timoleague. The gateway to the West Cork region, the town of Bandon dates back to 1604, and its 1604, West Cork Heritage Centre is a magnet for visitors tracing their ancestry. The picturesque village of Timoleague is perched on an inlet on Courtmacsherry Bay and overlooked by the ruins of an Abbey—a charming spot to stop off on a tour of the West Cork coast.

One of Ireland’s most enduringly popular tourist destinations, the majestic Cliffs of Moher in County Clare feature in "Harry Potter and the Half-Blood Prince" (2009)—the rocky shore where Dumbledore takes Harry to find the Horcrux is at the base. The designated UNESCO Geo Park also features as ‘The Cliffs of Insanity’ in The Princess Bride (1987). Ryan’s Daughter (1970), Into The West (1992) and Leap Year (2010) have all used the dramatic backdrop as well.

The sands of Ballinesker Beach, just east of Curracloe in County Wexford played a starring role in Steven Spielberg’s movie "Saving Private Ryan". Scenes in the World War II drama were memorably rendered here using members of the Irish Army reserve forces to recreate the D-Day landings in Normandy. Over the course of 11 weeks, 1,500 people, tonnes of explosives and thousands of gallons of fake blood transformed the sandy beach into a bloody battlefield, at a cost of USD$12milion. The scenes were filmed over 15 days, after which every trace was removed and the beach painstakingly restored to its natural state.

The remote island where Rey finds Luke Skywalker in exile in "Star Wars Episode ViI: The Force Awakens" is Skellig Michael (Sceilg Mhichíl in Gaelic), a rocky outcrop in the Atlantic Ocean, 13 miles off the coast of County Kerry. The tiny island is home to a 7th-century monastery, reached by 618 precipitous steps. The brave and fit can visit the island via boat trips from nearby Portmagee and Ballinskelligs, weather permitting.

Skellig Michael is revisited in Star Wars Episode ViII: The Last Jedi. Visitors might recognize a feature of the island known as the Wailing Woman—in the film Rey appears to slice it in two as she demonstrates her mastery of the light saber.

As the island, and its population of puffin birds, are protected, only a few days filming was allowed there. Porgs were invented to digitally replace puffins which appeared in the scenes! The stone beehive-shaped huts were recreated as a Jedi settlement on private farmland on the spectacular headland of Ceann Sibéal near the village of Ballyferriter on the  Dingle Peninsula. The Peninsula first came to prominence as a location in Ryan’s Daughter (1970) and has also featured in Ron Howard’s 1992 Far And Away, with Tom Cruise and Nicole Kidman.

Tours of Kilmainham Gaol museum in Dublin are a popular tourist attraction with a fascinating insight into history through the tours of the building. Many Irish revolutionaries, including the leaders of the 1916 Easter Rising, were imprisoned and executed in the prison by the British. In the late 1960s it was used as for interior scenes in the original The Italian Job film, where Mr. Bridger, played by Noël Coward, masterminds the brilliant heist. It has also been the setting for prison scenes in In the Name of the Father with Daniel Day-Lewis, historical drama Michael Collins, with Liam Neeson, and The Wind That Shakes the Barley.

Ireland’s rugged landscape and ruined castles stood in for the Scottish highlands in Braveheart, starring Mel Gibson as the 13th-century warrior William Wallace. Trim Castle, about 26 miles northwest of Dublin on the River Boyne, Co Meath, was dressed up as the fortified English town of York, with extensive wooden buttresses and a gate that weighed 7 tonnes. The English stockage was constructed around a hunting lodge in the Wicklow Mountains and Wallace’s dramatic horseback escape was filmed in the nearby Blessington Lakes where a 45-foot tower was specially constructed for the leap into the water (using a mechanical horse). Battle scenes were recreated in flat plains near the town of Ballymore Eustace and on the Curragh Plain, where the Battle of Stirling Bridge required six weeks and 2,000 extras to shoot (but famously, no bridge!).

Related: Ireland of the Welcomes, Movies