On This Day: Dublin's Kilmainham Gaol received its first prisoners in 1796

Dublin's Kilmainham Gaol (jail), first opened in 1796, is where many Irish leaders and rebels were held captive and executed. 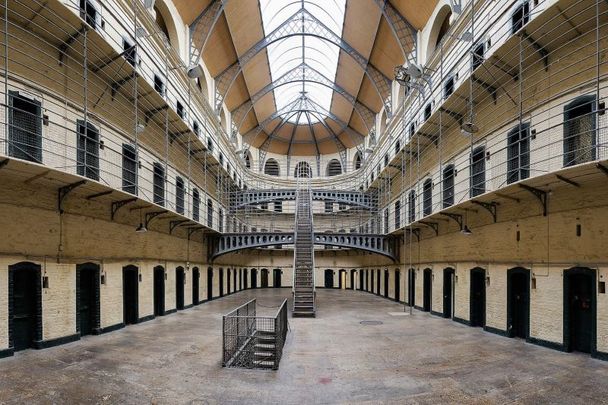 On August 12, 1796, Kilmainham Gaol in Dublin received its first prisoners. Here's a look back at some of the famous figures in Irish history who have been held captive within its walls.

Many famous Irish leaders and rebels met their ends at Kilmainham Gaol, so it is not surprising that ghosts are said to wander the prison’s desolate corridors or that spirits have been sighted in the courtyard where executions were held.

Kilmainham Gaol also holds an important place in the history of Ireland’s fight for independence as the Dublin jail was used in 1916 to imprison the leaders of the uprising, and many of the leaders were executed there.

On 12 August 1796, Kilmainham Gaol received its first prisoners. Describing the new gaol, Faulkner's Dublin Journal reported that 'for safety, healthfulness, convenience and compactness is said to be superior to any Prison in Europe'. pic.twitter.com/FhRdJ5KIdc

People have said they sensed ghosts around the prison chapel, where 1916 Easter Rising leader Joseph Plunkett married Grace Gifford only hours before his execution by firing squad.

James Connolly was one of the last of the leaders to be executed after the Rising. He had been so severely wounded that he had to be carried out in a chair to the courtyard, where he bravely faced a firing squad.

The prison was built in 1796 to hold criminals after their arrest until sentencing, and in the early years, public hangings would take place at its entrance. Prisoners at Kilmainham Gaol included the leaders of 1798, 1803, 1848, 1867, and 1916 uprisings; Éamon de Valera, Pádraig Pearse, and Charles Stewart Parnell were all housed there.

One inmate of the prison was Robert Emmet, a rebel leader who was hanged, drawn, and quartered in 1803. During his trial, Emmet asked that his grave go unmarked until Ireland was free, and the whereabouts of his body are still a mystery today. His ghost, however, is said to haunt not the prison but Dublin’s oldest pub, the Brazen Head, where he once held Resistance meetings.

Kilmainham Gaol was closed in 1924. At the time of its closing by the Irish Free State government, there was no interest in preserving a building that was a site of so much suffering and oppression.

Restoration of the prison began in the 1960s thanks to the Kilmainham Jail Restoration Society. The building reopened to the public 11 years later and it is still one of the city’s most famous attractions. During the restoration, a plaque was placed in the courtyard with the names of the brave men who were executed there.

During the early years of the restoration, governor Dan McGill, who was overseeing the work being done there, stayed in the prison with his family, just above the courtyard.

As he was getting ready for bed one night, he noticed lights on in the chapel across the courtyard. He went to the chapel, looked around, and turned off the lights. Returning to his chambers, he glanced back and saw that the lights were on again. He returned and turned them off, but he had to go back to turn off the lights three times that night.

Another incident that occurred during the restoration involved a painter, who was said to be blown off his feet and into a wall by a sudden gust of wind while he was working in the dungeon. He was held against the wall for some time before he could free himself. He refused to go back to the prison from that point on. Other workmen claim to have heard footsteps and voices coming from the halls and the cells.

Since the historic landmark opened to the public, several visitors also claimed to have experienced disturbing events at the prison, and many children have refused to enter the jail at all, sensing something sinister behind its walls.

For those souls not afraid of spectral spirits, and for anyone with an interest in Ireland's history, Kilmainham Gaol is open as a museum for tours year-round. Visit HeritageIreland.ie or KilmainhamGaolMuseum.ie for more information.