Get a new understanding of Irish America's favorite film The Quiet Man with these behind-the-scenes photos. 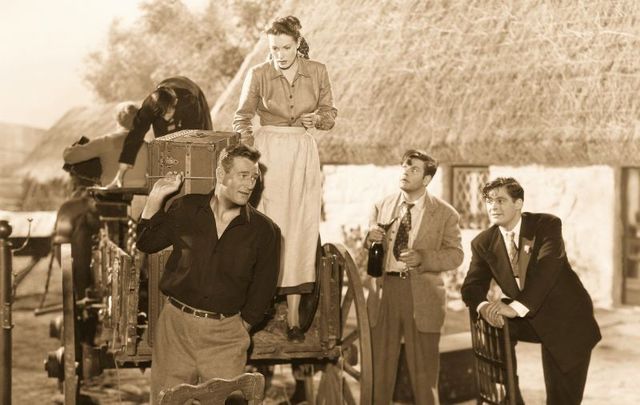 (L to R) John Wayne, Maureen O'Hara, Sean McClory and Charles Fitzsimons on the set of "The Quiet Man" directed by John Ford circa 1952. Getty Images

The Quiet Man began filming on June 7, 1951, in Ireland. It was a massive production for the time that involved filming in Cong, Co. Mayo, Ougtergard, Co. Galway, Ballyglunin train station, and Lettergesh Beach, and featured treasured Irish theatre actors like Barry Fitzgerald and Arthur Shields, and many locals as extras.

John Wayne also brought along four of his children, who had cameos in the movie - Michael (18), Mary Antonia "Toni" (16), Patrick (13), and Melinda (12) all play young people attending the horse races.

The following video shows a collection of behind-the-scenes photos from the filming of The Quiet Man. They're the moments you would never see just by watching the film.

It's amazing to see the film crew in action, John Wayne and Maureen O'Hara's friendship, the stars mingling with extras, locals, and the crew between scenes, and John Ford in the director's chair.

Until The Quiet Man, John Ford had been famous for western classics like Stagecoach, The Searchers, and Grapes of Wrath. The Quiet Man was his love letter to Ireland and the homeplace of his family.

And of, course, it was special for stars Maureen O'Hara and John Wayne to be filming in Ireland, too. O'Hara was born and raised in Ireland, and Wayne's grandfather hailed from  County Antrim.

Do you have a favorite scene from The Quiet Man? Let us know in the comments!