Shane MacGowan will perform a special rendition of 'Fairytale of New York' on Friday's episode of 'The Late Late Show' in Ireland. 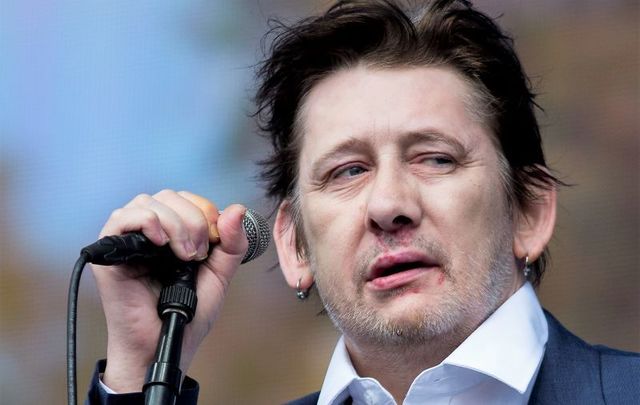 Shane MacGowan will perform a special rendition of 'Fairytale of New York' on Friday's episode of 'The Late Late Show.' Getty Images

Shane MacGowan and his iconic Christmas hit “Fairytale of New York” will be the focus of this week’s episode of “The Late Late Show” on RTE in Ireland.

Ryan Tubridy, the host of “The Late Late Show,” said: "What we Irish are very good at is making music.

“It is our privilege to pay tribute to one of the very best, Shane MacGowan, musician, songwriter and frontman of The Pogues.

"Shane and a host of stars will take to the stage to perform Fairytale of New York, as well as many other gems. In the lead up to Christmas on The Late Late Show, it promises to be a session like no other!"

Read More: POLL: Should ‘Fairytale of New York’ by the Pogues be banned?

"Fairytale of New York" has been the topic of debate in recent years for its inclusion of the word “faggot," as well as references to booze and drugs. BBC Radio Solent DJ Alex Dyke said recently he would no longer play the song during his program, slamming it as “downmarket chav bilge.”

RTE, however, told Joe.ie in a statement this week: "Last year RTÉ stated that the song 'Fairytale of New York' will continue to be played on RTÉ Radio without omissions; that statement also applies to RTÉ television content and still stands.”

RTE revealed on Thursday that in addition to performing ‘Fairytale of New York,’ MacGowan will be joined by Glen Hansard and Lisa O’Neill for a rendition of The Pogues’ hit song ‘Rainy Night in Soho.’

On December 11, MacGowan's wife Victoria Mary Clarke shared this behind-the-scenes snap on Twitter of her husband with Hansard and O'Neill:

Aidan Gillen, Patrick Bergin, Moya Brennan, Philomena Begley, and Pat McCabe will join MacGowan and wife Victoria Mary Clarke to discuss the writing of some of MacGowan’s best-known songs and the impact that he and The Pogues have had on the Irish music industry.

As if that wasn’t enough, US politician Martin O'Malley, former Governor of Maryland, will be in the studio for the evening to help give a hat-tip to MacGowan for the impact his music had on him as an Irish American.

You can watch episodes of RTE’s ‘The Late Late Show’ on the RTE Player online, and get ready to sing along with MacGowan on Friday!