What videos have IrishCentral readers been sharing the most in 2016? 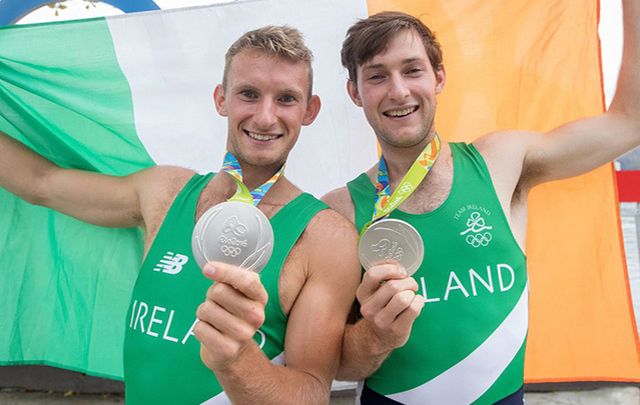 Gary and Paul O'Donovan provided us with one of 2016's best Irish viral videos. RollingNews.ie

As much as the complaints about 2016 have come rushing in and everybody is eager for 2017 to start, this year has brought its fair share of talent and hilarity to the table. From stomach-achingly funny interviews from Irish sports stars to the musical performances that leave you with shivers down your spine, here are the best of the viral videos from IrishCentral in 2016.

Gary and Paul owned the Rio Olympics, even being named by GQ magazine as one of the highlights of the controversy-marred Games. The Co. Cork brothers warmed the hearts of the world with their natural and hilarious interviewing style, with many of their question and answer sessions with sports journalists being dubbed as some of the most Irish things you will ever hear.

Here’s a reminder of how the silver-medal winning, rowing siblings became an online sensation with phrases such as “pull like a dog” and “podium pants.”

We’ve had some fantastic dance videos come our way this year, such as the eternal magic of Fusion Fighters, the jaw-dropping steps of Prodijig, or even this toddler on the streets of Galway City, but it was the Brooklyn-based dance troupe Hammerstep that you enjoyed most throughout 2016.

Here they are with their short film inspired by Irish dance and martial arts:

Originally recording this video in 2011, the Coda singing group came into the limelight in 2016 with thanks to the Assassin’s Creed" video game. Featuring the Sea Shanty “Leave her, Johnny, Leave Her” on one of the latest versions of game, fans of the song came across the Westport-based music groups versions when they searched for it online leading to a massive spike in the views and a well-deserved jump in popularity for the teachers, doctor and marine biologist who practise their seven-part harmonies in a kitchen of a Tuesday night.

This is sure to give you goosebumps.

As each year goes by, the music videos of Coláiste Lurgan become more and more popular and this year is so different. It’s no wonder the Irish summer camp was this year given its very own TV show on Irish-language TV channel TG4 what with the incredible talent they show off each year. This summer they produced some of their best covers so far with Adele’s “Hello”, in particular becoming very popular with IrishCentral readers.

Another of their biggest hits this year was Toto’s classic “Africa”:

5. Herd of Irish cows go for a swim off the Donegal Coast, as you do (VIDEO)

It seems that cows are a lot smarter than we may believe. This herd of cattle in Co. Donegal made a 650-ft swim from Inishcoo Island to Duck Island off the coast of Burtonport, Co. Donegal earlier this year and seemed to be sure of where they were going.

Locals ensure the Donegal Daily that although hard to navigate around, this was a normal occurrence.

With the increased presence of technology in this presidential election than in any other, social media played a much larger part in the campaigns were run and in how we all consumed news about the election. Many, many videos emerged of parodies and put-downs of all the candidates and main players but it was this speech from Bono regarding president-elect Donald Trump that IrishCentral readers shared the most.

The U2 frontman was scathing in his criticism of Trump as he took to the stage in October, sharing his thoughts with 16,000 people at the four-day tech conference hosted by cloud software giant Salesforce in San Francisco.  It seems Bono’s words did not have too much of an influence on voters, however!

This is very much a golden oldie that resurfaced with thanks to the Olympics this year. Long before the O'Donovan brothers arrived on the scene, one Irish "commentator" was sending international media and Olympic fans into convulsions of laughter at London 2012, with his very strange take on the Women's Laser Radial. (The very same sport in which our fantastic Annalise Murphy was to take silver this year in Rio.)

The video once again resurfaced in 2016 to the bemusement of many sports fans, bringing with it another wave of confusion to those who can't quite believe we have commentary like this in Ireland—maybe because we don't.