Saoirse Ronan is hosting Saturday Night Live for the first time this weekend, with musical guest U2 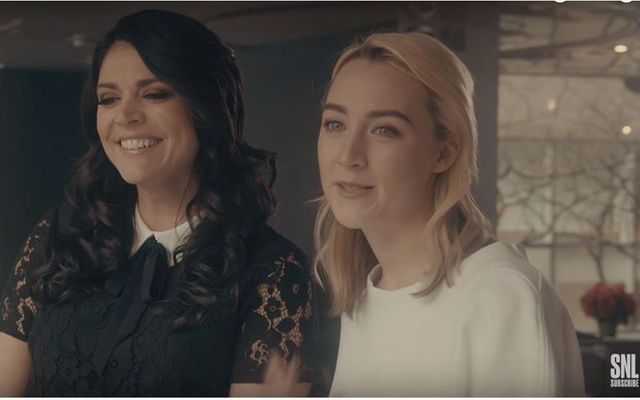 The first promo spot for Saoirse Ronan hosting Saturday Night Live is here and we could not be more excited for this week's SNL to air already.

The 23-year-old Irish actress is already having a kick-ass week with the news that her film Lady Bird is the top reviewed movie ever on Rotten Tomatoes, and now she's getting ready to go live from Studio 8H on Saturday night.

In the first promo spot, Ronan appears in the window of Rockefeller Center looking down at the people gathered below, quite certain that they are there to see her (as opposed to the massive Rockefeller Center Christmas tree). SNL cast member Cecily Strong is kind enough not to burst her bubble.

Ronan took some time out of her SNL rehearsal schedule to walk "down the hall" for a chat on Late Night with Seth Meyers, where the SNL alum asked her if she was proud to be part of this "very Irish" edition, with U2 as the musical guests.

"Yeah! It feels like the Irish are, like, taking over SNL for the whole week, as we should." Ronan said. "It's about time."

Asked if she'd met U2 before and what it was like to do SNL with them, she said:

"I think the great thing about Irish people - even well-known Irish people - is that we're all just very, very familiar with each other. So, like, the first time I met them it was like 'Ah jaysus, how's it going? How's the family?' and I'd never met these people before.

"But there's a huge sense of national pride with them because they're our biggest success story. So to get to do the show with them is great."

She also shared some of her favorite SNL skits:

Will you be watching Saoirse Ronan and U2 on SNL? Tell us in the comment section!