Other Voices: Home returns to the Guinness Storehouse for a one-off intimate gig this Wednesday, December 15 - tune in here! 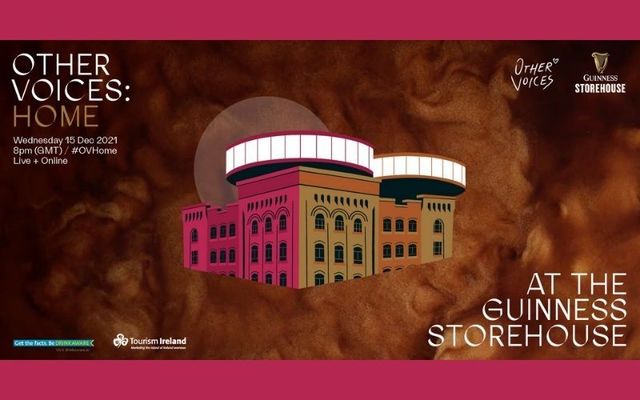 Tune into Other Voices: Home at the Guinness Storehouse this Wednesday, December 15! Other Voices

Other Voices: Home at the Guinness Storehouse returns this Wednesday, December 15 live from Dublin and is not to be missed.

IrishCentral is delighted to again be teaming up with Other Voices to bring you this one-of-a-kind live music stream from the Guinness Storehouse on Wednesday, December 15 at 8 pm GMT / 3 pm EST.

Hot on the tails of its Dingle event, Other Voices travels to the capital for their only Dublin show this year. For twenty years, Other Voices has developed an unrivaled reputation for nurturing and supporting Irish musicians, making them audible and visible to the world. This partnership event with the Guinness Storehouse will bring a very special curation of Ireland’s premier musical talent to an intimate crowd for a truly memorable concert.

This exclusive live event will showcase the cultural richness of Ireland and, crucially, provide a global platform for performers whose livelihoods have been severely impacted in recent times. The event will also stream live on the night at OtherVoices.ie, bringing the soundtrack of home to those who remain abroad this Christmas season.

Wednesday's special event follows on from Other Voices' hugely popular first collaboration concert in 2020, a virtual event that collapsed distance and connected people at home and abroad.

The evening event will be hosted by Loah, the singer-songwriter, and actor of Sierra Leonean / Irish origin, who will also perform on the night in a special collaboration. While studying at Trinity College Dublin, Loah has collaborated with Little Green Cars, Slow Skies, and I Have A Tribe, amongst others. She also contributed to Hozier’s platinum-selling debut album, co-writing the song “Someone New”.

"While we are perhaps not where we hoped we would be in the world at this time, there is still much cause for celebration of everything we’ve been through, our nearest and dearest, and great music. I am honoured to host this year’s show.“

I’m ready to put on a sparkly seasonal showstopper and host a beautiful evening of songs this Wednesday 15th at @homeofguinness 💃🏽!@OtherVoicesLive it’ll be a hootenanny and a half 💙✨🎄

Link to stream below - 8pm - set your reminders Xhttps://t.co/qmdkjKXWM9#ovhome pic.twitter.com/0ftb1HaXvX

Speaking about the production Philip King, Other Voices said: “At Christmas time, home is at the heart of everything. As we all know, that journey home was not possible for so many last year. Therefore, we aimed to collapse distance and light a pathway home and connect all of those separated from the ones they love, from friends, from family, from each other.

"Togetherness has never been more important. This evening will connect, entertain and inspire and send a message of hope, love, and courage this Christmas. I am delighted that we can again work at this remarkable location, with the Guinness Storehouse team.”

Two days to go til #OVHome 💫

On his upcoming performance at the Guinness Storehouse, Ryan McMullan said: “I look forward to singing some songs on the Other Voices stage, with a pint of my favourite stout, right at the source of which it is made, both to a live audience and to everyone tuning in at home. What an incredible way to end the year!”

Speaking of Bell X1’s involvement in the concert lead singer Paul Noonan said: “We’re delighted to be getting together with the Theodora Byrne Ensemble for Home at Guinness Storehouse. A rare opportunity to be moving the same air as a choir, bringing a new energy to our songs.”

Speaking about the event, Catherine Toolan, MD, Guinness Storehouse said: “We are so excited to host this special event with Other Voices that will connect our home in the heart of Dublin to homes across Ireland and further afield this Christmas. Ireland is brimming with talent and creativity, and we’re delighted to once again be able to collaborate with Other Voices to showcase some truly amazing musicians and to provide a platform from which they can engage with a global audience following yet another turbulent year. We are also delighted to be able to welcome music lovers to join us this year, at the Home of Guinness in The Liberties for what is sure to be an unmissable event.”

Commenting on the concert, Niall Gibbons, Chief Executive of Tourism Ireland, said: “Tourism Ireland is delighted to see the return of Other Voices: Home at the Guinness Storehouse and to once again lend our support in bringing this stellar musical event to an international audience. We know that the 2020 event was really well received by our Diaspora and by the many fans of contemporary Irish music across the world. Tourism Ireland will promote Other Voices: Home at the Guinness Storehouse on our social channels in advance of the event and will also cross-promote the livestream on Facebook, on 15 December.

"Highlighting events like this allows us to keep the island of Ireland to the fore, reminding people everywhere about our rich culture and keeping the destination top of mind for international travellers.”

Other Voices: Home at the Guinness Storehouse - the performers

Second only to U2 as Ireland's most popular rock band, Bell X1 crafts a tight, melodic pop sound that calls to mind pre-electronic Radiohead and Coldplay. Having recorded albums with the likes of Nick Seymour (Crowded House) and Roger Béchirian (Elvis Costello), the band is best known for its ability to craft infectious, durable, radio-friendly tunes and their vibrant gigs.

Multi-genre singer, rapper, and guitarist Maverick Sabre was born Matthew Stafford in the London borough of Hackney. He moved to Ireland during his childhood but returned to England to pursue his music. Set to launch a new album in 2022, Maverick Sabre continues to grab audience's attention with his powerful lyrics and melodies.

Pillow Queens is an Irish indie-rock band from Dublin. While taking influence from artists from contemporary US DIY indie & punk scenes (such as Mitski, Waxahatchee, Hop Along, Cloud Nothings), Pillow Queens stay true to their Irish heritage, using Dublin colloquialisms in their lyrics and singing in thick Irish accents.

Hailing from Portaferry, a small seaside town in Northern Ireland, the 25-year-old is a fresh new talent on the singer/songwriter scene. He has recently featured on BBC’s New Sounds and is just finished a tour with Snow Patrol.

Hailed as ‘one of the most thrilling Irish acts of recent memory’ and ‘Hot for 2020,’ John Francis Flynn was on a roll at the beginning of 2021. Having finished an attention-grabbing UK tour opening for Lankum and with The Oul Fip, his second album with emerging folk powerhouse Skipper’s Alley, released to favourable reviews. In November of this year, he won Best Folk Artist at the RTE Folk Awards.