Kenneth Branagh's "Belfast" has received a stellar seven Oscar nominations, while another Irish actress is enjoying a "surprise" nomination. 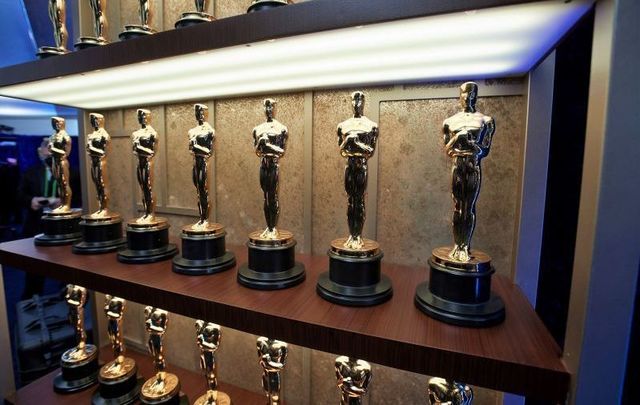 A view of the Oscar statuettes backstage during the 93rd Annual Academy Awards at Union Station on April 25, 2021 in Los Angeles, California. Getty Images

Kenneth Branagh has today become the first person to be nominated in seven different Academy Awards categories, making Oscars history, thanks in large part to his film "Belfast."

Branagh, a native of Belfast, has broken the record that was held by George Clooney, Alfonso Cuarón, and Walt Disney, who were each nominated in six different Oscars categories. He additionally joins Clooney and Warren Beatty as the only people to be nominated in every eligible major category — picture, director, lead or supporting acting, and both original and adapted screenplay.

Branagh's semi-autobiographical "Belfast" has been nominated in seven different categories for the 2022 Academy Awards, the nominations for which were announced earlier today, February 8. The film's seven nominations are level with "West Side Story," but both of those films were outnumbered by "The Power of the Dog," which grabbed 12 nominations, and "Dune," which landed ten nods.

So proud of our entire #BELFAST family 💛 pic.twitter.com/09gXK0gaFk

"It's a long way from the streets of Belfast to the Academy Awards," Branagh said in a statement after the nominations were announced. "Today, I think of my mother and father, and my grandparents — how proud they were to be Irish, how much this city meant to them. They would have been overwhelmed by this incredible honor — as am I. Given a story as personal as this one, it's a hell of a day for my family, and the family of our film."

Hinds, himself a native of Belfast, said today: "Having worked in this industry for nearly 50 years, I thought there wasn't much that could surprise me still. Today, I can honestly say, I am astounded, thrilled, and deeply grateful."

"Belfast" wasn't the only Irish talent landing coveted Academy Award nominations today - Co Kerry native Jessie Buckley says she's in "shock" to have been nominated in the Best Supporting Actress category for her turn in the film "The Lost Daughter," which also landed Olivia Colman a nomination in the Best Actress category and Maggie Gyllenhaal a nod in the Best Adapted Screenplay category.

"I am in complete shock!" Buckley said on Tuesday. "'The Lost Daughter' is so special to me. To be recognized for anything connected to it is just a wild dream come true."

An amazing success for Irish cinema - and fantastic recognition for #Belfast with seven nominations overall. pic.twitter.com/sznuF9sigY