"I was a huge fan from watching 'Normal People' and I was a bit giddy," Colman said of meeting her Irish co-star Paul Mescal. 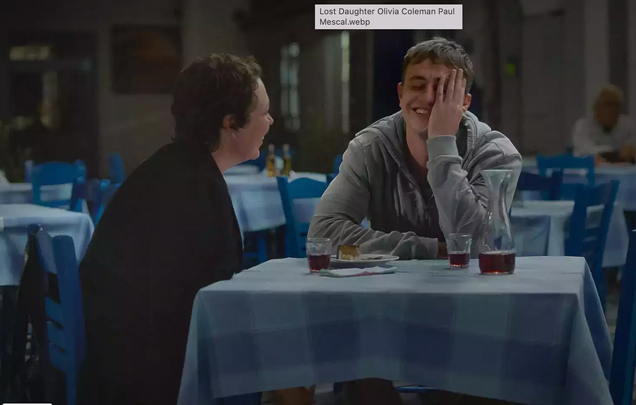 Olivia Colman and Paul Mescal in "The Lost Daughter."

Oscar-winner Olivia Colman, star of the critical darling "The Lost Daughter" now on Netflix (which could well earn her another Best Actress Academy Award), confessed that she was such a big fan of Paul Mescal that she couldn’t look the Irish actor in the eyes when they met on set for the first time last year.

Of course, Colman was enraptured by the "Normal People" series which made Mescal a breakout star.  “I was a huge fan from watching 'Normal People' and I was a bit giddy (when I met him),” Colman recently told The Sun.

She joked that her fandom was such that she made sure director/writer Maggie Gyllenhaal added a scene for them to appear in – but their screen time was already included.

“I couldn’t look him in the eyes when we first met. He’s just so kind and nice and a good person. And he sings beautifully. He’s just lovely,” Colman added.

“He’s the nicest and loveliest. He loves his family and he’s so brilliant in what he does. His work is beautiful.”

One thing that Paul definitely doesn’t love is social media.  The 25-year-old from County Kildare used to be fairly active on Twitter and Instagram, but he said adios to both to preserve his sanity.

“I’m definitely people-pleasing,” he said during a recent podcast on A24.

“I came off social media last year in an attempt to put a bit of control around that. I have this innately in me but I don’t need to see what people think of me all the f***ing time.

“I feel like some people are able to navigate (social media) so well. I just get f***ing scared of it. I’m just like well, this one person thinks this of me, therefore that person is a representative of 90 percent of the population, therefore I am hated.

“I know when you boil it down that’s not true but I feel like the loudest voice in the room is often the most negative.”