Wonder what you could hope to see in Ireland? These Irish movies will give you a taste of the landscape and wit you'll encounter in Ireland. 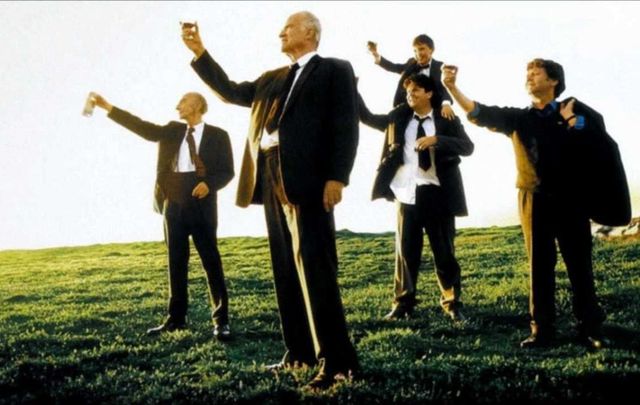 Waking Ned Devine is surely one of the most feel-good beloved Irish movies and it'll give you a great glimpse of the beauty of Ireland.

Rolling green hills, fascinating history, romance, wit and the infamous Irish ‘craic’ – these are all things you should expect to witness firsthand on your vacation to Ireland. These movies will help.

Whether you’re planning a trip or not, though, these movies will give you a taste of what Ireland has in store for you.

Let us know what other movies should be included.

This is definitely a favorite amongst IrishCentral readers. This John Wayne and Maureen O’Hara classic movie was filmed in Cong, County Mayo. The movie follows a famous boxer (Wayne) who comes to Connemara, from the US, to live a quiet life. However local rivals and the Hollywood beauty O’Hara soon put a stop to that.

The small village of Cong in Mayo has become a Mecca for all “Quiet Man” fans.

Starring Liam Neeson as Michael Collins and Alan Rickman as Eamon De Valera, this historic drama was filmed in the mountains of Wicklow and Dublin the movie tells the tale of the War of Independence and the Irish Civil War. Although it’s far from historically correct, it’s a great movie with a great cast.

This one isn’t terribly upbeat, but this movie gives an amazing snapshot of Limerick during Frank McCourt’s childhood, according to him at least. The movie was so popular that it prompted an “Angela” tour of Limerick.

Although this movie was actually filmed on the Isle of Man, it is a great example of the Irish sense of humor, fun, and community.

Devine plays the lotto, wins, and then dies. However, he never cashes in the ticket. His village neighbors decide to try and pull the wool over the authorities’ eyes and claim the winnings.

The Wind that Shakes the Barley

This powerful drama, starring Cillian Murphy, tells the story of Ireland’s struggle for independence. The movie follows the career of a young rebel (Murphy).

The jury is still out on whether Ken Loach’s movie is historically correct, but regardless it has become one of the most famous Irish movies around the world.

Based partly on real events, Pierce Brosnan’s movie focuses on a single father in mid-20th-century Ireland. Although this is a highly-melodramatic movie, it also highlights the inequality and bigotry of Irish society during those years.

Darby O'Gill and the Little People

Okay, so this is highly stereotypical and twee, but it’s also a real feel-good Disney movie that is based on Irish myths and legends. Yes, you’ve guessed it, the leprechauns.

So just like The Sixth Sense, unless you’ve been living under a rock you probably know the ending to this movie. However, there’s much more to this movie than Stephen Rea’s girlfriend turning out to be a man.

The movie follows the story of a British soldier who is taken hostage by Irish Republicans. The movie is dark, disturbing and also raises numerous questions about Northern Ireland.

In the early 1990s, Veronica Guerin, an investigative and campaigning journalist, took on Dublin’s drug lords. The criminals retaliated and killed her, sending a message to their enemies.

"Veronica Guerin" stars Cate Blanchett as Guerin and was filmed in various locations in and around Dublin. Although the movie is particularly grim, it is a great movie.

This movie follows the sad lives of young girls in a Magdalene Laundry in Ireland. These young girls “in the care of the state” provided slave labor for decades. This movie exposed to the world one of the most disturbing institutions of 20th century Ireland.