Irish crime journalist Veronica Guerin was murdered on June 26, 1996, on the outskirts of Dublin. 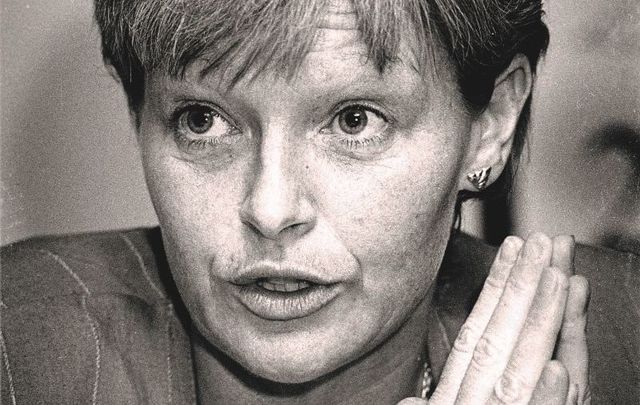 Veronica Guerin speaking at a Fianna Fail conference on crime in April 1996. RollingNews.ie

Every Irish journalist remembers where they were the day that Veronica Guerin was shot dead in Dublin, 25 years ago today.

Editor's Note: Veronica Guerin, who at the time was a crime journalist working for the Sunday Independent, was shot and killed on June 26, 1996  while stopped at a traffic light on the outskirts of Dublin. Guerin had become a target of Irish drug lords and courts later heard that her death was ordered by kingpin John Gilligan. In July 1999, Brian Meehan was convicted for his role in Guerin's murder and is currently serving a life term in prison.

On June 26, 1996, I was at the "stone" (look it up, young 'uns) at the Irish Independent watching the printers finish up the late edition of the Evening Herald.

The front page was finished and sent down to the camera when then-editor Paul Drury hung up from a phone conversation and shouted: “hold the front page.”

Contrary to popular belief, you rarely hear “hold the front page” in a newsroom, and we knew whatever it was, it was going to be huge.

“Veronica’s been shot,” he said, referring to the crime reporter at our sister newspaper, the Sunday Independent.

“Is she all right?” I remember asking as his words began to settle.

Dead? Veronica? She couldn’t be.

It was a beautiful sunny June day, we were trying to get finished to go watch the European soccer finals, and Veronica couldn’t be dead. I’d seen her only the previous week with her son Cathal outside the paper, running, as ever, late for something.

As the Evening Herald redid its front page, the Gardaí (Irish police) rang and asked the paper to hold off reporting the story until they could contact her husband Graham.

It was one of the longest hours ever in Independent House. Phones went unanswered and copy went unfiled as stunned journalists sat there and waited for the all-clear from the police, so we could report that one of our colleagues had been shot dead.

It was inconceivable that a journalist had been killed in the Republic. No one in Ireland seriously believed that any criminal would assassinate a journalist. 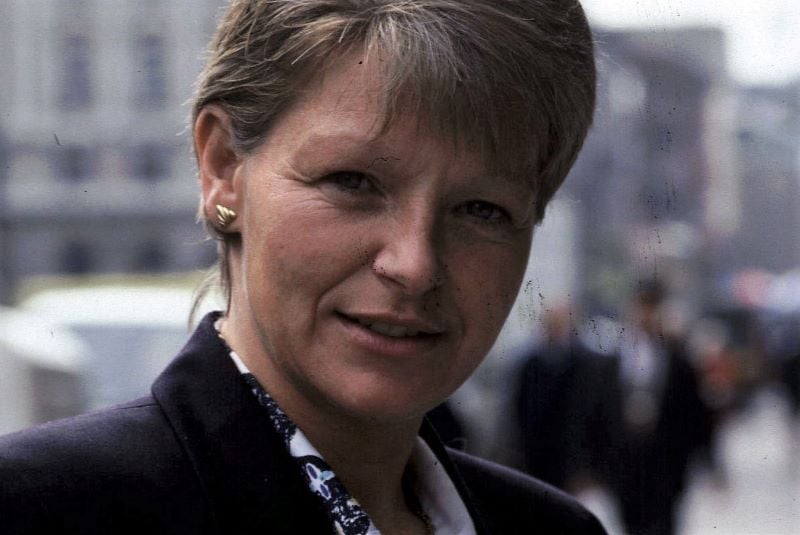 I had known Veronica since 1994 when I was working as a stand-in copy editor on the Sunday Independent. She had written a complicated story about corruption, and the libel lawyers insisted I contact her as they wanted to change several paragraphs. When I reached her at home, she was surprisingly friendly about making the corrections and we hammered out a different version.

I say “surprisingly” because some of the headline writers for the Sunday Independent would (and did!) chew me up into pieces for having the temerity to suggest any changes.

Anyway, by the time we had finished reworking the piece, the lawyers said it was still too libelous and the story was spiked.

I chatted to Veronica for a while longer, apologized for bothering her at home on a Friday night, and came off the phone with a completely different impression of her. Some writers would rather stab the copy editor to death than change a word in the story, while others accept it as the necessary evil it is in Ireland. Veronica, while unhappy that the story was being changed, was not taking it as a personal affront.

I spoke to her several times over the year over different stories but did not actually meet her in person until August 23, 1995. We had both been given tickets by our respective editors for Manchester United’s second game of the season at Old Trafford against West Ham and we were supposed to meet at the airline ticket desk.

I’d waited at the desk for a half-hour and then given up, assuming she had gone on to the gate before me. When I couldn’t find her at the gate, I began to get a little concerned.

With seconds to go before they closed the flight, Veronica came running into the departure lounge with a bemused security officer in her wake. Turns out she had been delayed because she had been in the airport chapel praying. Not the sort of place that you would expect to find a hardened crime reporter, but then again, she wasn’t what you would expect a hardened crime reporter to be either.

The trip to Old Trafford was a gift from a corporate travel agent, and we were ferried to a swanky country club on the outskirts of Manchester for tea and sandwiches. I have no idea what the travel agency expected from us, with Veronica a crime reporter and me a foreign editor, but we played along anyway, nodding and smiling when it seemed that nods and smiles were expected from us.

Then it was up to the corporate boxes where, once the tour leader’s back was turned, we escaped from the tour and went out on to the streets around Old Trafford.

Wandering around the makeshift stalls which spring up on match day, curiosity got the better of me and I asked Veronica why she had been in the airport chapel. She said she always went to the chapel before she got on a plane.

She was a regular Mass-goer and yes, she knew she was an oddity as far as Dublin journalists were concerned, given that most of them probably wouldn’t even be able to find their local church.

As we gathered up more t-shirts to take home as souvenirs, I asked her how she had continued to write for the Sunday Independent after being shot [Guerin was shot by a gunman in the leg on 30 January 1995]. She said she was just doing her job, writing about crime and its associated effects. 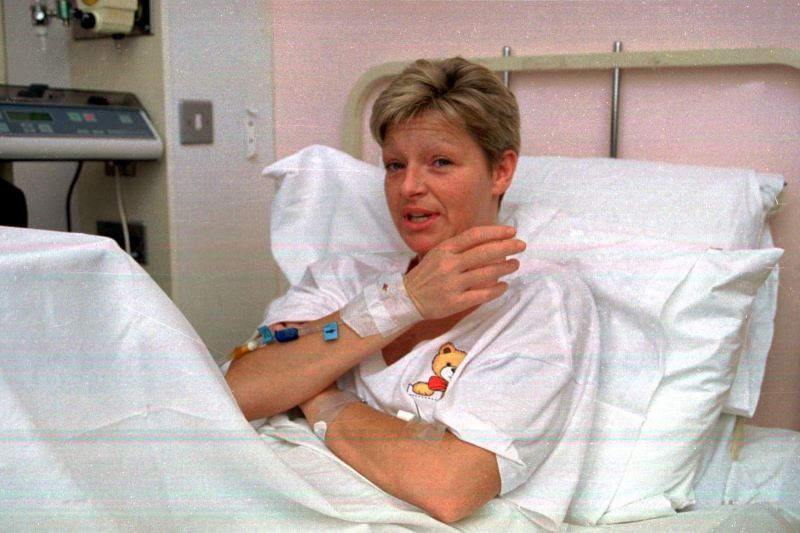 Veronica Guerin in the hospital on January 29, 1995 after being shot in the leg. (RollingNews.ie)

Like all mothers, she worried about her child’s future but she also worried that her son would grow up in a crime-infested city as the authorities appeared to be ignoring the drug epidemic. Unlike many people in journalism and indeed Dublin, Veronica felt it was a foolish choice to avoid the problem by isolating yourself from it.

This was no self-obsessed celebrity journalist talking. This was a mother talking. She didn’t see herself as some social crusader recklessly ignoring threats to her family.

She felt she had dealt with the death threats and moved on.

We went back to Old Trafford, watched Manchester United beat West Ham 1-0, and behaved like a pair of children when we realized Eric Cantona was seated a couple of rows behind us. Veronica described how games in her house were fraught affairs as she would lock herself into a room with a pack of cigarettes and smoke her way through the game.

When the game was over we headed back to the hotel for a few drinks and met up the next morning for the trip back to Dublin.

The last time I saw her was the week before she died, outside the office with Cathal. We had spoken on the phone a few times in between, but you always think there’s going to be more time.

She rarely came into the office and when she did, she didn’t stop long. She did her work the old-fashioned way, door-stepping and calling out to people.

She lived a mainly quiet life, preferring to spend time with family and friends than talking shop in the pub, and was unfairly judged as being aloof for this.

Veronica just didn’t want to be a celebrity journalist. And besides, she didn’t hang out on the celebrity trail – which was probably the root of some of the ill-feeling towards her.

Veronica’s passion for her work was driven by her disgust at what was happening to her city. Pockets of Dublin had developed into complete no-go areas, and the gangs making the money from this seemed to be completely untouchable.

Dublin journalists, by and large, did not live in the kinds of areas that were being decimated by drugs, and subsequently, Veronica was one of the few reporters who kept after this issue.

Knowing now what we didn’t know then, I don’t believe she would have continued writing such stories if she had thought the threat to her life was so grave. She wasn’t some reckless reporter out to make a name for herself as the great drug crusader. She was a woman who couldn’t understand why more people weren’t taking on the drug barons.

I often wonder how she would have felt to know that, in the end, it took her own death – not the deaths of the countless children which she reported on – to push the authorities into action. 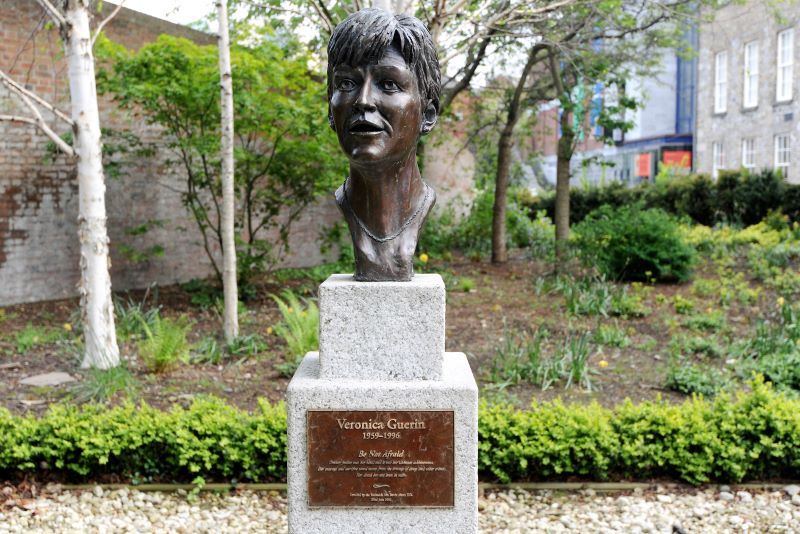 A memorial to Veronica Guerin in the gardens at Dublin Castle. (RollingNews.ie)