Matthew McConaughey tuned in for a virtual bingo night as a treat for residents at The Enclave senior living home in Red Rock, Texas. 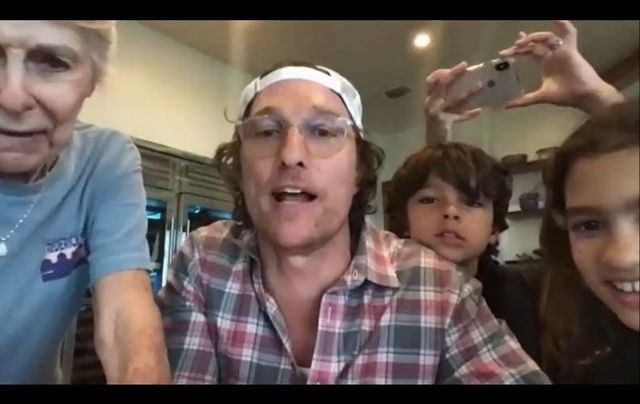 Matthew McConaughey and his family tuned in for virtual bingo, much to the delight of some senior citizens. Spectrum Retirement Communities

Matthew McConaughey responded to a request from senior citizens at The Enclave in Texas to guest host their beloved bingo night!

Matthew McConaughey and his family took the time to host a virtual bingo event for senior citizens at The Enclave at Round Rock Senior Living in Round Rock, Texas.

Staff at The Enclave say that they regularly host bingo nights for their residents, but have never previously had a celebrity guest host. McConaughey took the time to tune in for the event following a request on social media from The Enclave’s residents last September, which sought to have the fellow Texan and Longhorns fan make an appearance:

The Residents of The Enclave at Round Rock Senior Living have a question for Professor McConaughey..

The Residents of The Enclave at Round Rock Senior Living have a question for Professor Matthew McConaughey! "Alright, Alright, Alright"... Help us go viral and share this video to make their wildest dreams come true. #JUSTKEEPLIVIN Moody College of Communication - UT Austin

Making the residents' "wishes come true," McConaughey tuned in with his mother Kay, his wife Camila, and his children for the virtual bingo session.

Molly Davis Nedley, the sales director at The Enclave at Round Rock Senior Living, said: “Our team members can’t interact with the residents the way we normally do, so we have been doing everything possible to uplift them virtually.”

She added: “The residents absolutely loved seeing Matthew and his family and enjoyed hearing him talk about what he’s doing to get through this crisis.  It gave them hope and was the boost that they needed to get through this lonely, challenging time.”

Bradley Kraus, the President and CEO of Spectrum Retirement Communities, thanked McConaughey for his act of kindness: "We are beyond grateful for Matthew’s time and sincerity with our residents. He provided connectedness, happiness, and joy to an incredibly isolated and vulnerable population, and for that, we are most thankful.”

William Swearingen, SVP, Sales & Marketing of Spectrum Retirement Communities, told IrishCentral: “The generosity and kindness Matthew McConaughey and his family showed our residents was beautiful, but more importantly we were gifted with a humble message from his heart.  And for that, we will be forever grateful.”

Read More: Matthew McConaughey hopes to send his kids to the Gaeltacht

Check out the McConaughey's bringing the virtual party to these senior citizens:

Afterward, residents at The Enclave filmed this short video as a show of thanks to McConaughey:

During a time when we are all working to make lemonade out of lemons, we are so humbled that Matthew took the time to play our favorite game with us. As Matthew would say, let's turn this red light into a green light!

In March, McConaughey, whose maternal grandmother hails from Ireland, issued a message urging people to stay home in order to take care of themselves and one another, and said "every red light eventually turns green:"

*Special thanks to Spectrum Retirement Communities, owner and operator of The Enclave at Round Rock Senior Living, for use of their videos and pictures.