How an Irishman nabbed Marilyn Monroe’s dress for Kim Kardashian

Kardashian made headlines when she appeared on the red carpet clad in the "evocative piece of fashion history" worn by Monroe when she sang "Happy Birthday" to President John F. Kennedy in 1962 at Madison Square Garden. 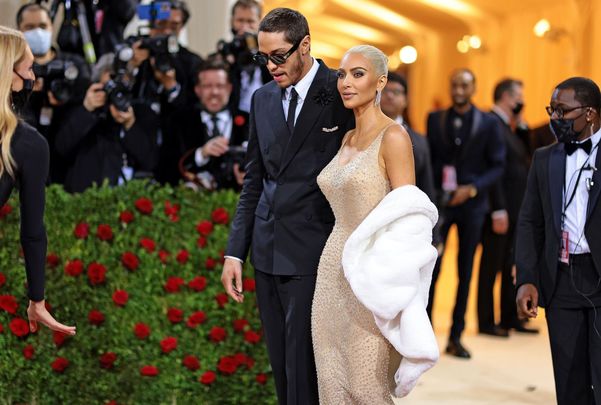 Kim Kardashian with her boyfriend Pete Davidson at the Met Gala on Monday night. Getty

Kardashian made headlines when she appeared on the red carpet clad in the "evocative piece of fashion history" worn by Monroe when she sang "Happy Birthday" to President John F. Kennedy in 1962 at Madison Square Garden.

Kardashian and her team met with the Ripley Entertainment team on several occasions, including the company's Irish president John Corcoran, to discuss the parameters about wearing the dress.

Corcoran and the rest of the Ripley team established that Kardashian could only wear the dress up the carpeted steps of the Metropolitan Museum.

They also said the iconic piece of fashion could not be altered in any way and prohibited Kardashian from wearing body makeup.

Kardashian and her mother Kris Jenner used Darren Julien of Julien's Auctions as a go-between during negotiations for the use of the dress and Julien revealed that Ripley initially suggested using a replica dress for the event.

"The owner’s first reaction was, ‘We have a replica dress, she could wear that,’ and I said, ‘Kim doesn’t do replicas," Julien told the Hollywood Reporter.

Amanda Joiner, the Vice President of Ripley Entertainment, said the Ripley Believe It or Not museum almost always turns down requests to borrow items.

"We have people who call to ask about borrowing things all the time, and the answer is almost always no," Joiner told the Hollywood Reporter.

"We were intrigued to hear what Kim’s thoughts were, but it was never an automatic yes. Many conversations took place once the idea came to us."