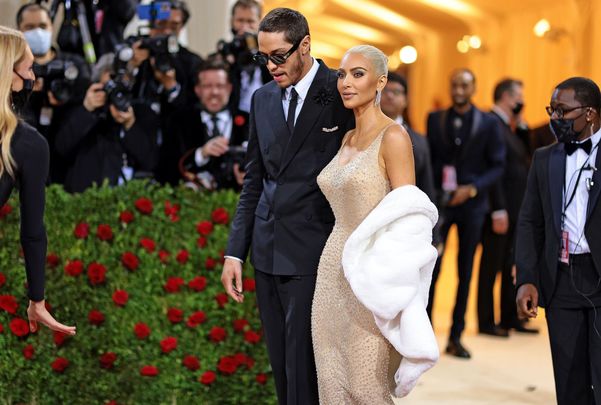 Pete Davidson and Kim Kardashian at The 2022 Met Gala celebrating "In America: An Anthology of Fashion". Getty

Kim Kardashian wore the iconic beaded dress worn by Marilyn Monroe when she sang "Happy Birthday" to President John F. Kennedy, in 1962, to the Met Gala in New York.

Kim Kardashian said she was "honored" to wear this "evocative piece of fashion history" to the 2022 Met Gala, on May 2. The reality TV star and businesswoman, Kardashian had borrowed the gown from Ripley's Believe It or Not! museum who had bought the dress for $4.8 million in November 2016. It originally cost $12k in the 1960s.

The theme for the 2022 Met Gala, held at the Metropolitan Museum of Modern Art in New York, was "In America: An Anthology of Fashion and the Gilded Glamour". Kardashian's gown was certainly the center of attention on Monday night.

Marilyn Monroe's 1962 gown is a figure-hugging Jean Louis gown with more than 6,000 crystals adorned on it. Reportedly Monroe was sewn into the gown before performing for JFK at a fundraiser held at Madison Square Garden on May 19, 1962.

Kardashian admitted to Vogue on the red carpet at the event that she lost 16 pounds in order to fit into the outfit.

She went above and beyond with her hairstylist Chris Appleton transforming her signature waist-length jet black hair into platinum blonde, styled it in a slicked-back bun.

On Instagram, Kardashian wrote: "I am so honored to be wearing the iconic dress that Marilyn Monroe wore in 1962 to sing'Happy Birthday' to President John F. Kennedy.

"It is a stunning skintight gown adorned with more than 6,000 hand-sewn crystals by costumier Jean Louis.

"Thank you Ripley’s Believe It or Not! for giving me the opportunity to debut this evocative piece of fashion history for the first time since the late Marilyn Monroe wore it.

"I am forever grateful for this moment."

Kardashian attended the event with her boyfriend, "SNL" star Pete Davidson (28). He admitted that he was happy to let Kardashian take center stage.