Happy Birthday, Mr President! How much did Marilyn Monroe’s JFK dress sell for?

Iconic dress is the most expensive item of clothing ever sold at auction. 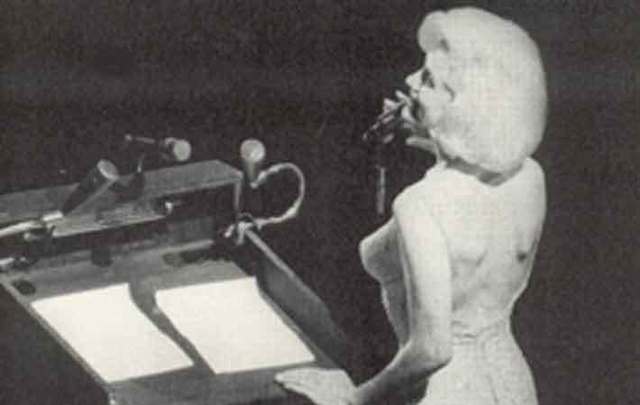 The iconic dress Marilyn Monroe wore when she sang "Happy Birthday" to JFK.

The iconic dress that the legendary Marilyn Monroe wore when she sang “Happy Birthday” to John F. Kennedy on his 45th birthday celebration in 1962 is the most expensive item of clothing ever sold at auction.

The stunning, form-fitting dress, which was so tight the movie star had to be sewn into it, was purchased for $4.8 million on November 17, 2016 at Julien’s Auction’s in Los Angeles. The dress had previously been sold at an auction in New York in 1999 for over $1.26 million.

Marilyn Monroe in the stunning gown.

“This is the most iconic piece of clothing that anybody ever wore,” says Martin Nolan of Julien’s Auctions. “It’s historical. It’s political. It’s Marilyn Monroe. It’s the Kennedy’s. It’s a fashion statement.”

The skin-colored gown shimmers with 2,500 crystals, all of which had to be “strategically” hand-stitched on the dress because Marilyn did not wear undergarments.

It was her sultry, seductive performance at Madison Square Garden on May 19, 1962 for the celebration of the president’s 45th birthday that sparked rumors between an affair between Marilyn and JFK.

The dress has been preserved on a mannequin custom-made with the exact measurements of the legendary starlet.

According to CNBC, the highest bidder of the Jean Louis-designed dress was a representative from the Ripley’s Believe It or Not Museum.

Read more: What JFK meant for Ireland on that historic visit