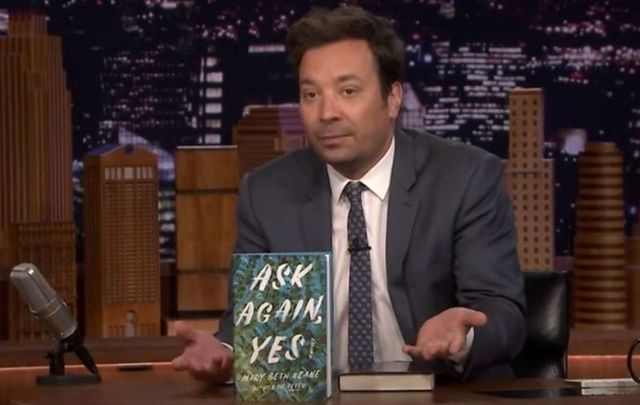 Keane’s ‘Ask Again, Yes,’ which follows her other novels ‘The Walking People’ and ‘Fever,’ won The Tonight Show’s Summer Reads contest with over 50 percent of the “hundreds of thousands of votes” that were cast.

You voted! The 2019 Tonight Show Summer Reads winning book is... "Ask Again, Yes" by @marybethkeane! Link in bio to find out where to get a copy. Read along with me using #TonightShowSummerReads!

On Thursday’s show, Fallon said of the five books that were nominated: “They’re all fantastic books, but only can be the winner.”

This morning I got so many good lucks and handshakes in Dublin it was like I was running for President of Ireland. Thank you everyone!!!!!!

After 'Ask Again, Yes' was revealed as the winner, Fallon said: “We’re gonna read this book together, I want all of us to read this together,” adding that readers can follow along on Instagram and Facebook with the hashtag #TonightShowSummerReads.

The Tonight Show says: “The book tells the story of Francis Gleeson and Brian Stanhope, two rookie cops working together in 1973 New York City. When their families end up living next door to each other in a suburb just outside the city, it sparks a lifelong friendship between their children, Kate and Peter. What happens behind closed doors in both houses sets the stage for the explosive events to come. One shocking night their loyalties are divided, and their bond will be tested again and again over the next 40 years.”

On Facebook, Keane shared her gratitude with all those who voted:

I can barely comprehend all this, but I owe a MASSIVE thanks to so many people: my friends and family here and in...

You can watch the big reveal of the Jimmy Fallon book club 2019 selection here:

You can buy 'Ask Again, Yes' on Amazon, Barnes and Noble, or IndieBound.

Have you read 'Ask Again, Yes' by Mary Beth Keane yet? Let us know in the comments!