Jessie Buckley won the Best Actress in a Musical prize at the Olivier Awards 2022 for her turn as Sally Bowles in the revival of "Cabaret" on London's West End. 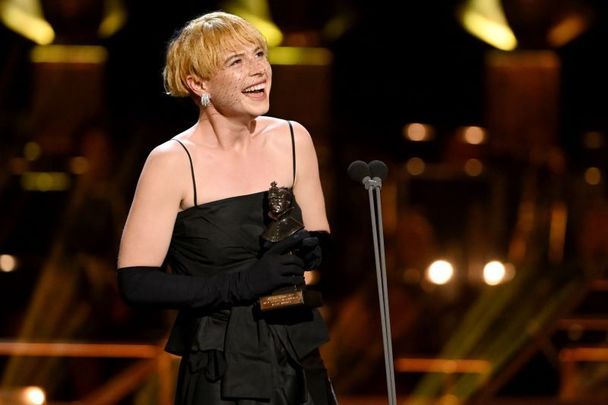 April 10, 2022: Jessie Buckley accepts the award for Best Actress in a Musical for "Cabaret" on stage during The Olivier Awards 2022 with MasterCard at the Royal Albert Hall in London, England. Getty Images

Jessie Buckley didn’t get the Oscar last month for her role in "The Lost Daughter," but the Irish actress's mantel is housing another prestigious award as she won the Best Actress in a Musical honor at the Olivier Awards in London on Sunday night.

Kerry-born Jessie took the top prize for her star turn as Sally Bowles in the recent revival of the classic musical "Cabaret" in London. Jessie wowed the critics with her interpretation of Sally; so did co-star Eddie Redmayne, who also won an Olivier Award as Best Actor for his portrayal of the Emcee.

“This is like my worst nightmare and my biggest dream all at once!” the 32-year-old Jessie told the audience at the event, which is London’s equivalent of the Tonys.

"It's such a huge privilege to be part of this community, which I consider my family. Thank you for welcoming me in all those years ago. This is just so lovely."

"Cabaret" scooped seven of the 11 prizes it was nominated for at this year's Olivier Awards.

Redmayne now has an Oscar and an Olivier to his name. He praised Jessie for her work in the musical which played to SRO audiences during their time as headliners.

"Every night, getting to introduce her singing ‘Cabaret,’ and then getting to peek through the curtain and watch her roar that track was the stuff that dreams are made of," he said.