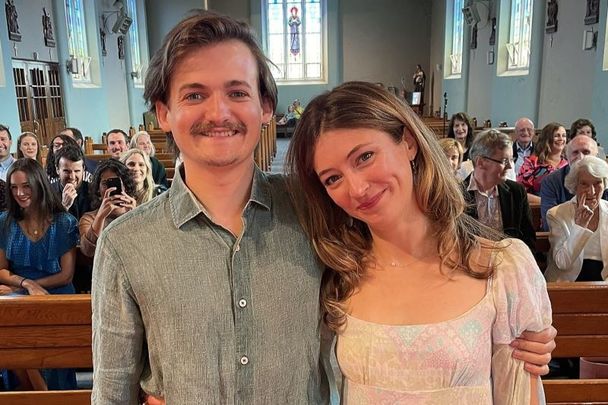 Jack Gleeson, the Co Cork native who starred as Joffrey Baratheon in “Game of Thrones,” got married over the weekend to his partner Róisín O’Mahony in a lovely ceremony in Co Kerry.

Father Patsy Lynch, who officiated the nuptials, shared some snaps from the occasion, which was held at the Church of the Sacred Heart of the Glen in Ballinskelligs, Co Kerry, on Twitter.

Afterward, Fr Lynch told Independent.ie that the event in Co Kerry was a “pre-wedding ceremony,” and that the “real ceremony” will take place in England.

“The family have been holidaying down here in Ballinskelligs, The Glen, for many years and they have so many happy memories here,” Fr Lynch said.

"We had a lovely, prayerful, dignified wedding ceremony. Jack texted me this morning to say that it was such a wonderful, moving ceremony and afterwards they went for a meal."

He added: “I think it was the sheer simplicity that just touched everyone, and everyone was happy and content. Everyone down here knows Jack and that shows they’re just part of the whole community. When I met him, it was as if we knew each other all our lives, he’s that kind of person. There’s nothing artificial.”

Gleeson's wife O'Mahony is from London but has an Irish family. She's one part of the UK-based Róisín & Chiara comedy duo.

Gleeson, who was born in Co Cork and raised in Dublin, will feature in the upcoming Irish film “In the Land of Saints of Sinners,” which stars Liam Neeson, Ciarán Hinds, Colm Meaney, and Kerry Condon. The movie, a thriller, was filmed in Co Donegal.

A synopsis for the film reads: "Set in a remote Irish village, Neeson will play a newly retired assassin who finds himself drawn into a lethal game of cat and mouse with a trio of vengeful terrorists."

Gleeson's turn in the new Irish movie comes nearly ten years after he expressed his discontent with starring in a huge TV show. He told the Irish Independent in 2013: "It was always a recreation beforehand, but when I started doing Game of Thrones perhaps the reality was made too real for me.

"The lifestyle that comes with being an actor in a successful TV show isn't something I gravitate towards."