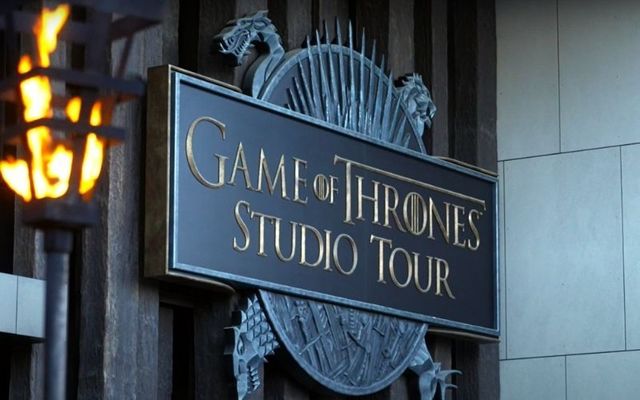 A new €48 million Game of Thrones studio tour featuring a dozen original sets has opened in Banbridge, County Down.

The Game of Thrones Studio tour is located in the vast Linen Mills Studios, off the Dublin to Belfast road, which was one of 26 locations in Northern Ireland used for filming during the eight seasons of the hugely popular HBO show.

The studio tour, which opened on February 4, features original costumes, props, and life-sized models of the hit show's characters, as well as tens of thousands of weapons used in the show, including swords, spears, shields, and a giant scorpion crossbow.

Tommy Dunne, the Wicklow armorer who designed and made the weapons, told RTÉ that he was "proud" that the weapons were now on public display.

"It’s fantastic to see them all here on display for the public to see and showing my work and my team’s work. A lot of work, a lot of blood, sweat, and tears has gone into it," Dunne told RTÉ.

Interactive displays will allow visitors to test out their accuracy with a bow and arrow, while they will also be able to transform themselves into characters from the show.

They will additionally learn about how sets, costumes, and special effects on the show were designed.

Ian McElhenny, who played Ser Barriston Selmy in Game of Thrones, said he was "blown away" by the new studio tour.

"The imagination that’s gone into creating all of this, and then the skill in realizing it, is phenomenal," he told RTÉ.

McElhenny added that one of the "great things" about the new studio tour is that much of the work was completed by local artisans and craftspeople.

He said the tour would be a huge benefit for the Northern Irish tourism sector.

An estimated 350,000 people visited Northern Ireland every year to see Game of Thrones filming locations before the outbreak of the Covid-19 pandemic.

Aine Kearney, Director of Business Support and Events for Tourism NI, said one of six people who visit Northern Ireland state they are visiting specifically for Game of Thrones.

Kearney added that the new studio tour would have a "transformative" effect on the region's tourism sector as it bids to recover from Covid-19 lockdowns.

The tour is serviced by regular shuttle buses from the Boulevard shopping center in Banbridge, Store Street Bus Station in Dublin, and the Europa Bus Centre in Belfast.