Belfast's Titanic Studios, where 'Game of Thrones' was filmed, up for sale

The iconic Titanic Studios in Belfast, the home base for HBO's hit show Game of Thrones, is described as a "once-in-a-lifetime investment opportunity." 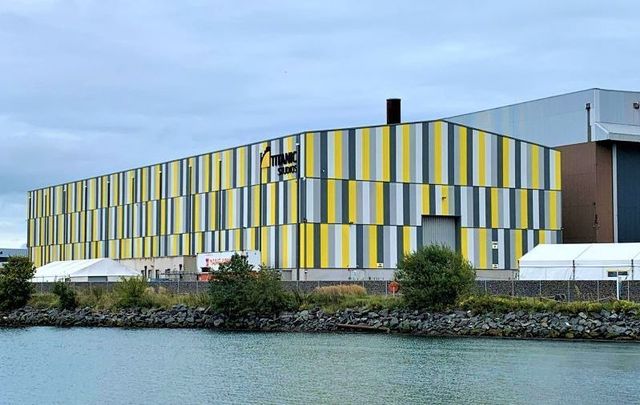 MacQuitty and Hurst stages at Titanic Studios in Belfast. Handout

Titanic Studios in Belfast has been listed for sale according to specialist commercial property consultants Riddell McKibbin.

The 42,000 sq ft unit is currently under license to HBO and famously the location where hit-show Game of Thrones was filmed.

The building includes what is known as MacQuitty and Hurst Stages set within a 42,000 sq ft standalone steel portal framed building, situated directly adjacent to the Titanic slipway and Victoria Wharf on the eastern side of the River Lagan, where it meets Belfast Lough.

Mark Riddell, Director at Riddell McKibbin commented: “This is a truly unique space and there will be no doubt much excitement as this studio, now known all over the world due to shows filmed here, comes to the market.

“The studio is a once-in-a-lifetime investment opportunity for any purchaser and so we would not expect this to remain on the market for long.”

The space comprises two large clear span studios which are connected by a large acoustic door allowing for a combined use as one large space.

The building sits on approximately 3 acres (1.21 hectares) and is held by way of a 250-year lease (from 2012) from Belfast Harbour Commissioners (BHC) on Peppercorn rent.

Minister Lyons said: “It was fascinating to see the film set of ‘Dungeons and Dragons’ today. This is another example of how Northern Ireland has established itself as a highly desirable filming location. This is not only for the diverse, beautiful, and accessible locations, but also because of the outstanding skills base that has been built here.

“Our local industry has risen and adapted to the significant challenges posed by Covid and continues to provide jobs and promote Northern Ireland. This has been done with support from Northern Ireland Screen. As we rebuild our economy, further development of skills in the screen industries will play a key role in that recovery.”

“I want to commend the efforts of all involved and wish ‘Dungeons and Dragons’ every success when it hits screens around the world. This is Paramount’s first production in Northern Ireland, but I hope that it will not be the last.”

You can learn more about Titanic Studios in Belfast here: