TG4 revealed the latest batch of recipients for the Gradam Ceoil awards doled out in an annual live broadcast. 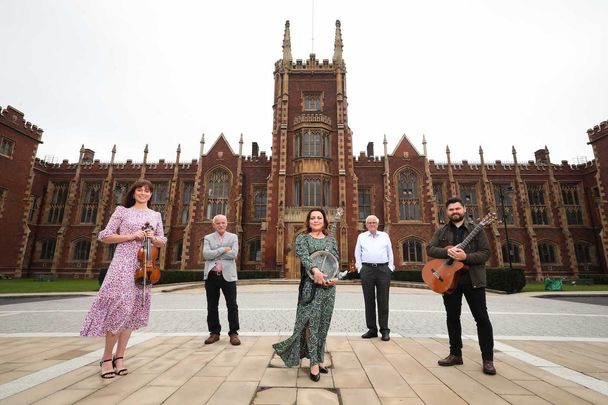 As summer draws to a close and we settle into the fall, two landmark programs announced details for the coming weeks that once again attest to the importance of trad music to TG4 and the growing audience it has cultivated.

Last week TG4 revealed the latest batch of recipients for the Gradam Ceoil awards doled out in an annual live broadcast.  Always a prestigious recognition determined by a discerning panel of peers from the tradosphere, the selection process is usually spot-on in their choices and this year is no different.

The top honor as Musician of the Year goes to Angelina Carberry who was born in Manchester but has lived in her ancestral county of Longford since the 1990s. Considered one of Ireland’s most tasteful banjo players, she didn’t steal it as the Carberry name is well known in traditional music through her father Peter, an accordion player, and her great uncle also named Peter who plays the uilleann pipes.

Angelina plays the banjo in the unhurried style associated with her grandfather Kevin.  She first came to our attention as a member of the Bumblebees, the all-female band formed in Cork that also featured last year’s Musician of the Year Laoise Kelly.

The Young Musician of the Year is Sorcha Costello, a fiddle player from Tulla, Co. Clare, and daughter of esteemed East Clare concertina player and teacher Mary McNamara.  Sorcha made a deep impression on me since she toured the U.S. with Comhaltas in 2015.  She recorded a gorgeous CD with her mother Mary, The Ladies Cup of Tea, emphasizing that the apple doesn’t fall far from the tree.

As Ennis celebrated hosting Fleadh Cheoil na hEireann in 2016 and 2017, it was apparent that the teaching gene had also passed on as the younger ceili bands Sorcha taught showed great poise and command.  Frankie Gavin recruited her for his Provenance fiddle trio to accompany him, and she just graduated UL’s music therapy master’s course.

The Singer of the Year nod goes Tyrone’s Niall Hanna, upholding the family’s place in Ulster song legacy following in the footsteps of his grandfather Geordie Hanna and his sister Sarah Anne O’Neill while assuring the tradition was not only safe but still creative in the younger generation.   In fact, all three of these choices are emblematic of the vibrancy of the Living Tradition in Irish families passing on the music.

The Composer of the Year accolade goes to the Australian-born Steve Cooney, who has been well-heralded in recent years for his multiple skills advancing Irish traditional music on guitar and now for his own compositions.

The Lifetime Achievement prize goes to the venerable Corkonian Sean O Se from Ballylickey in West Cork, whose early work with Sean O’Riada and Ceoltoiri Chulainn back in 1960 gave a gloss to traditional Irish music and song that uplifted it at the time. In his later years, his prominent work with Comhaltas Ceoltoiri Eireann at Bru Boru, countless fleadhanna and tours, and special events have bolstered his selection for this category.

Finally, the Outstanding Achievement award goes to the Glengormley School of Traditional Music, marking 20 years of teaching at a high level based in Newtownabbey at the Edmund Rice College in Belfast. It is further indication of how far and important traditional music has become in the north of Ireland and Belfast in particular.

With the Gradam Ceoil closing out its fourth year in Belfast this year, alas it will do so without a live audience at Whitla Hall at Queen’s University on Sunday night, October 31 at 9:30 p.m. (www.tg4.ie) due to Covid restrictions.

The Gradam Ceoil broadcast has become one of the most-watched shows on Irish television over the years due to the quality and prestige of the presentation to Ireland’s top purveyors of the pure drop. This year’s program also celebrates TG4’s 25th birthday and will include a special dedication to the late Mary McPartland who initiated the Gradam Ceoil Awards 24 years ago in Galway.

The second popular program in the TG4 arsenal is a similar appreciation for the Irish artists who devote themselves to tradition bearing and practice either as professionals or enthusiasts.  Now in its 12th series since 2001, Se Mo Laoch focuses on a single musician in a biographical documentary format that has evolved significantly over the years. It still combines the essence of why that individual has fostered and inspired so many musicians to follow their lead as they also have delighted audiences home and away over the course of a lifetime.

The new series began on Sunday, September 12 in TG4’s Sunday night trad slot at 9:30 p.m. and will do so for the next four out of five weeks leading up to the Gradam Ceoil night with a special anniversary show on Sean O’Riada who made his mark on how traditional music would be presented in the 1960s interjected in that time frame.

The first episode was devoted to Mairead ni Mhaonaigh from Gweedore, Co. Donegal in a poignant and personal story of her journey as a young musician and singer steeped in the Donegal Gaeltacht handed down from her father Francie Mooney, a seminal force in Tir Connail.

Her nephew Ciaran O Maonaigh directed the new series of five shows along with producer Donal O’Connor which will also feature Kevin Conneff of the Chieftains and then three artists who are under the radar of most people outside the core of the tradition in John and Pip Murphy, harmonica players from Wexford with great trad breeding, 89-year-old lilter Seamus Fay from Cavan and sean nos singer Aine Ul Cheallaigh, originally from Belfast but resident in Ring for decades.

All these shows can be viewed originally on a Livestream and always on the TG4 player for a month after airing at www.tg4.ie.