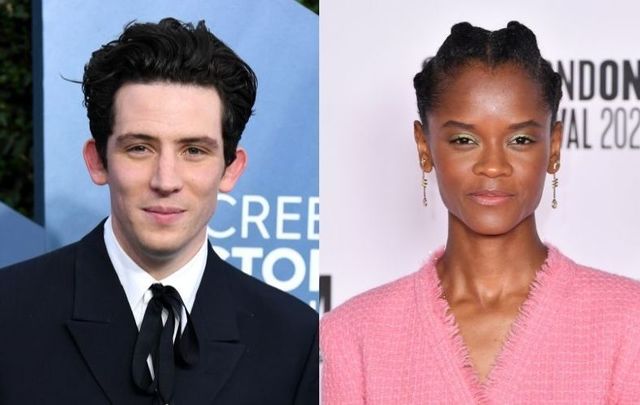 Josh O’Connor and Letitia Wright are understood to have joined the cast of Irish filmmaker Frank Berry’s new project "Provision."

According to The Hollywood Reporter, "Provision" will tell the story of Ishtar Deresse (Wright), a young African woman fleeing persecution who ends up spending over two years in Ireland’s asylum system, under constant threat of deportation.

While there, she befriends a security guard (O'Connor), who emphasizes with her plight. However, the more their growing connection develops, any possible future together comes under frequent threat in an environment where asylum seekers are deemed to be just numbers.

British actor Josh O’Connor recently scooped a Golden Globe and Critics' Choice award for his portrayal of Prince Charles in the Netflix smash-hit series "The Crown." His role in 2017's "God's Own Country" also earned him several awards.

In 2019, Guyanese-British actress Letitia Wright won the Rising Star BAFTA and was amongst the group who won the Outstanding Performance by a Cast in a Motion Picture SAG Award for her work in "Black Panther."

Dublin-born Frank Berry, the man behind the award-winning "Michael Inside," "I Used to Live Here," and "Ballymun Lullaby," is set to direct the new movie which is reportedly due to begin filming in Ireland in April. Donna Eperon, Aoife O'Sullivan, and Tristan Orpen Lynch will serve as producers through the Dublin-based Subotica Entertainment.

On March 5, Subotica tweeted that they were hosting a casting call for a new project that is set to be filmed around Dublin this spring:

Casting call for a new film we are shooting in April / May in the Dublin region, please share! #irishfilm pic.twitter.com/bKkqgdcZQ8

The casting news comes not long after the Irish government announced that it has committed to ending the Direct Provision system by 2024.

In 2019, Berry told The Dublin Chronicler: “I think there can be no denying that direct provisions as a system is hurting people.

“Many asylum seekers will have already been traumatised when they arrive in Ireland, and their experience of this system only traumatises them further. I don’t make any great claims for filmmaking as a force for change, but I do think a truthful, realistic film about the experiences of asylum seekers that come to Ireland is worth making."