Ed Sheeran is given the Irish dance treatment in a fantastic Memorial Day tribute. 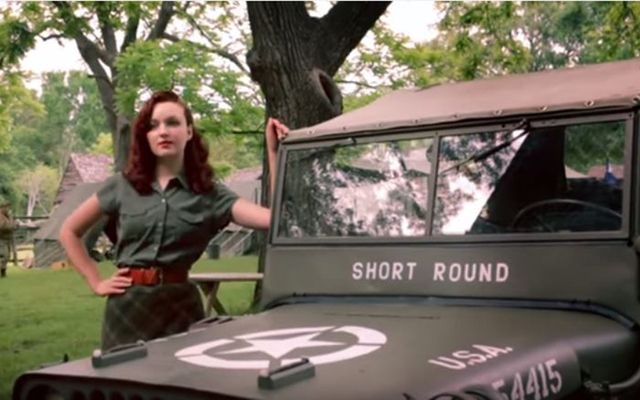 A North Carolina Irish dancer has taken the Irish influence in Ed Sheeran’s latest album to a whole new level with this stunning old-timey video to the tune “Nancy Mulligan,” the song inspired by the English singer’s grandparents.

Hannah Redlich has previously created some brilliant work choreographing Irish dance to the likes of the Hamilton musical but the young dancer, who was inspired at a young age by Jean Butler, Michael Flatley, and Riverdance, has once again used her ingenuity to produce this incredible and touching Memorial Day tribute to the music of the world’s current favorite redhead.

“I LOVE the Celtic influence in Ed Sheeran's new album!  I particularly fell in love with this song and knew it would inspire choreography,” Redlich told IrishCentral.

“The line ‘I met her guys in the second World War’ first prompted the idea of setting it in the 1940s.  When I was brainstorming the shoot, I decided to dedicate it to those who have given their lives defending us, especially with Memorial Day around the corner.

“And, of course, it's never a bad time to thank our Veterans, so I included a message for them as well.  I was fortunate enough to know some fantastic Reenactors from Historic Latta Plantation that were willing to assist me.”

Speaking about how the talent and creativity of Lord of the Dance Michael Flatley influenced her own “out-of-the-box” approach, Redlich believes that while she has a great love for the traditional art form, she wants to spread the beauty of the dance to the masses by making it accessible to new audiences.

“It's fun to think of new ways to present it,” she states.

“I started dancing almost 14 years ago when I was around 7 or 8 years old.  As a toddler, I was obsessed with Riverdance!  I still vividly remember dancing around the living room, mimicking Jean Butler's every move.

“I started briefly with ballet and tap but fell in love with Irish dancing when I finally found an opportunity to learn it.  I love the elegance and grace of soft-shoe, the rhythm of hard-shoe, and the uniqueness of this dance form,” Redlich continued.

“Though, I think my ancestral connection to Ireland has also driven my love for Irish Dance. It's in my blood!”

For those unfamiliar with the story of “Nancy Mulligan”, while a very upbeat song, it is, in fact, a beautiful tribute to the romance between Sheeran’s parents. That wasn’t to say his grandmother was too impressed when it was first played to her. You can see a video of her reaction here.