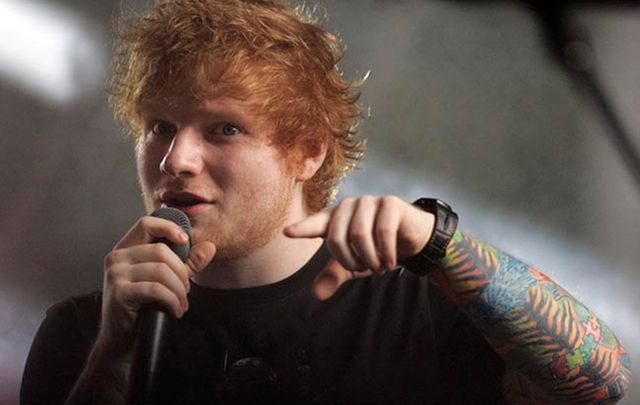 Ed Sheeran wrote a song about his Irish grandmother for his new album Divide, and she hears it for the first time in this video from RTÉ.

In the recent interview, Sheeran's Wexford granny, 92-year-old Anne (also called Nancy) talks about her super star grandson and his musical talents. She also, for the first time, listens to the song “Nancy Mulligan”, which is played for her on a mobile device.

The Irish folk tune is told from the point of view of his grandfather William Sheeran, who falls in love with the Irish lass despite their differing Catholic-Protestant religious backgrounds and her father’s opposition to the relationship.

On the summer day when I proposed
I made that wedding ring from dentist gold
And I asked her father, but her daddy said, "No
You can't marry my daughter"

“Nancy Mulligan” is one of two songs on the 26-year-old singer/songwriter’s third album that uses a traditional Irish sound. The other song is “Galway Girl.”

"I don’t think enough people use [Irish music] in pop music," Sheeran said recently. "For some reason it’s considered twee and old, but it’s such exciting, youthful music, it should be at the forefront of pop culture. Hopefully if these songs are successful, more people will do a bit more like it."

In the video, Sheeran’s Wexford grandmother says “I never think of him as famous, you know, I have to say. Because he is exactly the same as he always was when he visits. And it’s very rare because he’s always working.”

After listening to the song written about her, she says, laughing: “It was fine. As long as I’m not the one playing it.”

Another song on the album, "Supermarket Flowers" is about his maternal grandmother, who passed away while Sheeran was making the record.