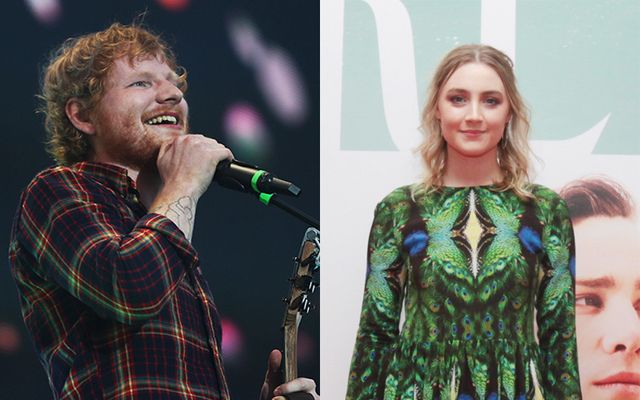 It’s a good job that Ed Sheeran had an otherwise memorable time last week when he visited Ireland to film the video for his next single “Galway Girl,” because the lasting memento he had inked on his body to remember it by was pranked in a way any leprechaun would be proud of by Irish actress Saoirse Ronan.

Ronan is believed to be playing the role of the “Galway Girl” in question in the upcoming video, but in the spirit of the fun-loving, joking girl that the song is about, when Sheeran asked for the New-York born actress to write Galway Girl down so he could get a tattoo in her handwriting on his upper arm, the jokester wrote “Galway Grill” instead. English singer-songwriter Sheeran never copped on until it was way too late and the joke was already nicely planted on his skin.

“She really took the piss out of me with this one,” Sheeran told the crowd at his tour stop in Scotland.

“I’m actually kind of proud of her. It’s the kind of thing that I would do.”

There’s been no inkling from Ronan yet as to whether she’s anxious about any retaliation, but the joke appears to have been taken in good spirits.

It’s lucky that the “Shape of You” singer is OK with a relatively permanent practical joke being played out on his skin, but he’s already the owner of enough tattoos that it must be hard to keep up anyway. The singer already has an Irish-language tattoo that reads: “nuair is gá dom fháil bhaile, is tú mo réalt eolais” (when I need to get home, you’re my guiding light).

This tattoo is mentioned in the chart-topping Irish traditional song when the Galway girl/Saoirse Ronan says to him “what does it mean, the Gaelic ink on your arm?”

The singer, whose grandparents hail from Ireland, included two songs influenced by Irish traditional music on his third studio album “Divide” and brought on board the Belfast-based group Beoga to help him. Beoga joined Sheeran on stage during his two sold out shows in Dublin last week where they performed the “Galway Girl” tune sung by Mundy and Sharon Shannon before launching into Sheeran’s song of the same title.

The second song, “Nancy Mulligan,” tells the story of Sheeran’s grandparents who were Protestant and Catholic but ignored the difficulties and the family backlash to marry. Sheeran has spent a lot of time in Co. Wexford where his granny has now returned and often stays there when he has shows in Ireland.

The singer previously spent time busking on the streets of Galway before he reached such international stardom but returned last week to film part of the “Galway Girl” video at the same spot.

The flame-haired musician almost brought Co. Galway to a standstill as word spread that he was filming around the county and the crowds turned out to try to catch a glimpse. He was more than happy to see them, however, posting a thank you to Instagram before racing back to Dublin for his night-time show.