"The Irish Civil War," a new RTÉ documentary series, studies the events that led to the outbreak of Ireland's Civil War in 1922. 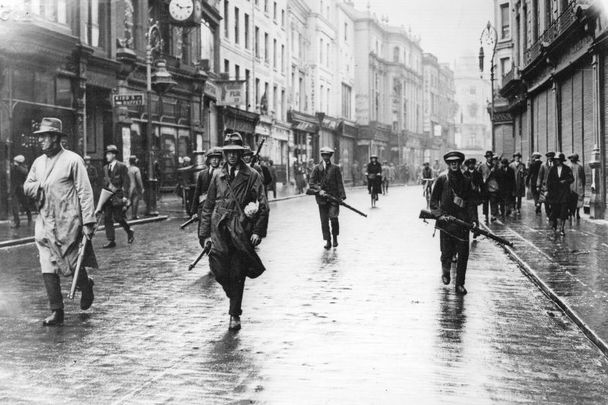 "The Irish Civil War," a new three-part documentary series narrated by Irish actor Brendan Gleeson that debuted on December 11, studies the events that led to the outbreak of the Civil War in 1922.

Director Ruán Magan, in collaboration with University College Cork, studies the seismic events of the early 20th century as Ireland struggled for independence from Britain, including the 1916 Easter Rising, 1918 General Election, and the War of Independence, which broke out in early 1919 and led to the signing of the controversial Anglo-Irish Treaty in December 1921.

The second half of the first episode of the series studies the fallout from the treaty negotiations, as Irishman began to turn on fellow Irishman and the country was plunged into civil war.

One eyewitness quoted in the documentary describes the feeling of optimism in Ireland after a truce was declared in the summer of 1921.

"The summer of 1921 was a gorgeous summer. People began to think we actually had something."

However, Ruán Magan masterfully builds a sense of renewed conflict and forthcoming tragedy in the opening episode of his three-part series.

The series is based on the 2017 book "Atlas of the Revolution," which draws on local and regional analysis to put the Civil War in context.

The series also draws on the different opinions of those on opposing sides during the conflict in addition to those who were caught up in the violence.

There were more than six months between the signing of the Anglo-Irish Treaty in December 1921 and the attack on the Four Courts by irregular IRA troops in June 1922, and the documentary sets about capturing the turmoil of those six months as Ireland moved from one bloody conflict to another.

Magan's series focuses on the Treaty Debates in the Dáil and the social, economic, political, and military upheavels that unfolded in the first half of 1922 and contributed to the outbreak of Civil War.

The remaining two episodes of the three-part series will air on RTÉ on December 12 and December 13 at 9:30 pm. All three episodes will be available on the RTÉ Player.

Narrated by #BrendanGleeson and produced in partnership with @UCC 'THE IRISH CIVIL WAR' tells the epic and often challenging story of the origins, conflict and legacy of the civil war that took place in Ireland in 1922 and 1923. #TheIrishCivilWar 11, 12 & 13 Dec 9.30 on @RTEOne pic.twitter.com/4w3rFy4kPm