34 IRA men hid out in Tormore Cave in Co Sligo in 1922, where a recent archaeological excavation unveiled more than 200 Irish Civil War-era artifacts. 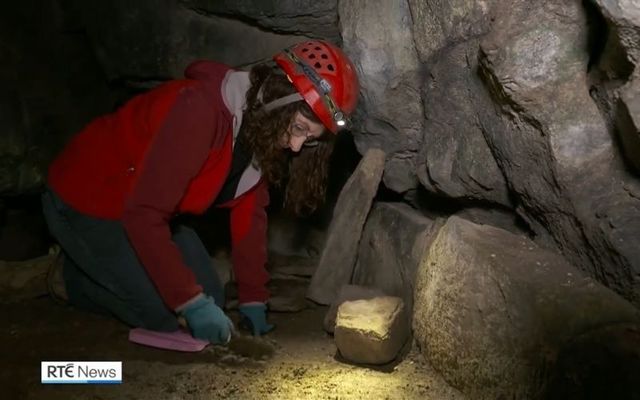 More than 200 Civil War-era artifacts have been uncovered at an old IRA hideout in a cave in Co Sligo.

Located on private land in the Dartry Mountains, the cave had been used as a hideout during the War of Independence before it became a principal hideout for the North Sligo anti-treaty IRA during the Civil War.

An archaeological excavation at the site has uncovered more than 200 artifacts, including pottery, glass, a pipe, and a shoelace.

In September 1922, the Free State Army closed in on the North Sligo IRA's headquarters at Rahelly House, causing 60 volunteers to flee to the nearby Ben Bulben in the Dartry Mountains. Several men were captured in the mountains, while six were shot dead.

The remaining 34 volunteers made for the sanctuary of Tormore Cave, where they remained undetected for six weeks.

Dr. Marion Dowd, who led the excavation of the cave, said the cave was one of the most successful hideouts of the entire revolutionary period.

Dowd told RTÉ that the cave had been modified and prepared for usage, most likely during the War of Independence.

The excavation revealed that a large boulder was strategically placed near the entrance to the cave, while a series of steps had also been constructed.

IRA volunteers also installed a mortar wall and a mortar-surface floor that was later layered over with flagstones.

Dowd said the excavation aimed to document the hideout and investigate how it was used as part of the anti-treaty IRA's guerilla tactics.

She said the cave was essentially a "time capsule" because so few people had visited it over the past 100 years.

She said the men created a home for themselves in the cave and added that shards of pottery and glass found in the hideout are probably related to food and drink brought to them by local sympathizers.

Meanwhile, a skillet pot that was found in pieces was probably used as a kind of portable toilet, Dowd said.

Funded by the Atlantic Technological University, the research is incredibly significant because it remained so well hidden over the past century, according to Dowd, who said that most buildings and sites dating back to the Civil War had either been destroyed or continued in use.

Robert Mulraney, an archaeologist who took part in the excavation, said the researchers are seeking to identify the men who took refuge in the cave and became "largely forgotten" after the Civil War ended.

The research team has so far identified seven men who took refuge in the cave and is calling on anyone with relatives who hid in the cave to get in touch with the Atlantic Technological University in Sligo.

All artifacts uncovered at the site have been sent to Dublin for further analysis.

You can watch the RTE News reports on the recent archaeological research excavation in Co Sligo here: