Go caroling with some cheery Irish melodies, Christmas carols, and favorite hymns, to get everyone singing and more importantly smiling. 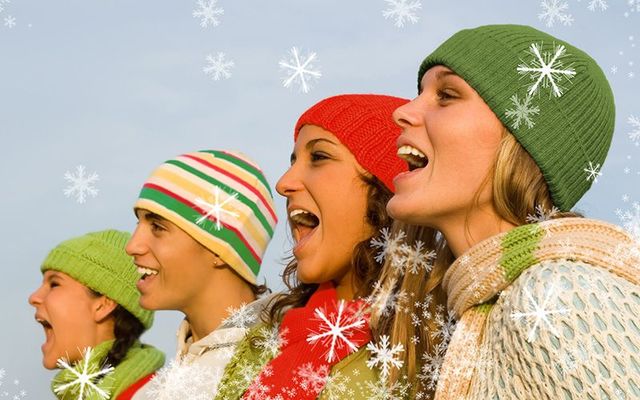 Go Caroling Day! Get into the Christmas spirit with these classic Irish tunes! iStock

These Irish Christmas songs and Celtic carols are the perfect tunes to get you and your loved ones in the holiday spirit.

Whether it’s while you’re out doing your shopping, at Church, or huddling in the safety and warmth of your home, Christmas carols are a wonderful, cheerful constant every Christmas. A cheering melody to get everyone singing and more importantly, smiling.

Here are our choices of some traditional, along with some not-so-traditional, Irish tunes to get our readers into the holiday mood.

"The Wexford Carol" originated in Enniscorthy, County Wexford (hence the name). It dates back to the 12th century and tells the story of the nativity of Jesus. It is one of the oldest known Christmas carols. For centuries this song would only be sung by men but since 1990 it has been recorded by many female artists, including Loreena McKennit and Celtic Woman.

This tune was written by John Redmond, James Cavanaugh and Frank Weldon in 1950. Over the years it’s been recorded by Bing Crosby on his album “Merry Christmas” as well as Ruby Murray in the 1950s and Dennis Day. It was also recorded by Bobby Vinton (1964), Anne Murray (1981), and the Irish Rovers.

"Once In Royal David's City"

This Christmas favorite was written as a poem by Dubliner, Cecil Frances Alexander. It was first published in 1848 in “Miss Cecil Humphreys' hymnbook Hymns for Little Children”. It was an English organist, Henry John Gauntlett, who set the poem to music the next year.

The carol was first recorded by the King's College Choir in 1948. Since then it has been recorded and sung by hundreds including Mary Chapin Carpenter, The Chieftains, Daniel O'Donnell, The Mormon Tabernacle Choir, Petula Clark, Jethro Tull, and Sufjan Stevens.

Named “Curoo, Curoo” (mimicking the call of birds) or “The Carol of the Birds” this song dates back to the 1800s. The song literally celebrates the melodies of the birds. In the past, it has been recorded by singers such as The Clancy Brothers and Danny O’Flaherty.

Although British in origin, this song has been an Irish favorite for a very long time. The song originated in the 17th century in Derbyshire, England. It’s thought the song refers to three ships that brought the purported relics of the Biblical Magi to Cologne Cathedral in the 12th century.

This has also been recorded by several artists including Craig Duncan, on the album “Irish Christmas” and “Narada Presents: The Best of Celtic Christmas."

This has officially been voted the best Christmas song of all time by various television, radio and magazine polls in Ireland and abroad. The Pogues released this tune back in 1987 and it took the world by storm. Featuring Shane McGowan and Kirsty MacColl it featured on the album “If I Should Fall from Grace of God.”

This is a wonderful, haunting Irish carol. The title roughly translated means "That Night in Bethlehem." Recently it was performed and recorded by the group Celtic Woman.

This song was featured on The Chieftains' Christmas album “The Bells of Dublin.” The tune, by Jackson Browne, was just one of many rerecorded with The Chieftains. Other artists that worked with them on their Christmas music included Elvis Costello, Kate and Anna McGarrigle, Marianne Faithfull, Nanci Griffith, Rickie Lee Jones, and the actor Burgess Meredith.

At the time Paddy Moloney said, “These recording sessions hold special memories for The Chieftains and myself, and bring together all the colors of this festive season."

"Whilst Shepherds Watched Their Flocks by Night"

This is another famous Christmas carol which was written by an Irishman, Nahum Tate, back in 1692. He went on to become the poet laureate of England. The carol tells the tale of the Annunciation to the Shepherds.

What's your favorite Irish Christmas carol? Let us know in the comments below!