When they played Carnegie Hall in 1962 they included a wonderful 13-minute vignette of songs they remembered from their childhood. 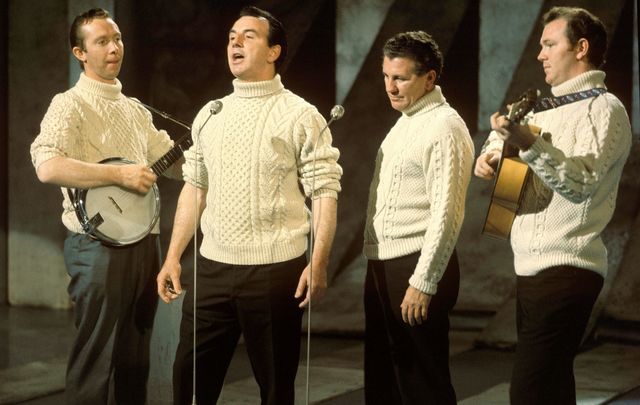 When the Clancy Brothers and Tommy Makem first played Carnegie Hall in 1962 a man dropped his hat out of the balcony. Makem didn’t miss a beat: “It’s a good thing your head wasn’t in it!”

They were off and running and the result was one of their greatest albums for Columbia Records. “In Person at Carnegie Hall” contains the usual songs about drink, women, and rebellion, but it also contained a wonderful 13-minute vignette of songs they remembered from their childhood.

One of the songs was particular to the Christmas season, as Liam Clancy soon relayed to the audience: “But children can be very cruel, you know. And we used to do a very cruel thing coming on towards Christmas. We use to go out with big novelty sticks, out through the fields, and kill a little bird called the Wren. A harmless little thing. And we’d put the corpse in the middle of a holly bush and we’d decorate it with ribbons, colored papers and things like that. Then on the day after Christmas, on St. Stephen’s Day, we’d blacken our faces and dress up in women’s clothes, all sorts of mad things. And go around from door-to-door, singing this song, and collecting money—for the funeral! And the song we sang as we went around from door-to-door was called ‘The Wren Song.’”

St. Stephen's Day was caught in the furze,

Although he was little his honor was great,

Jump up me lads and give him a treat.

Up with the kettle and down with the pan,

And give us a penny to bury the wren.

As I was going to Killenaule,

I met a wren upon the wall.

I took me stick and knocked him down,

And brought him in to Carrick Town.

’Tis in the bush that I love best

In the tree the holly tree,

We followed the wren three miles or more,

We followed the wren three miles or more,

At six o’clock in the morning.

A penny or tuppence would do it no harm.

“Some say the divil’s dead

Some say the divil’s dead

And buried in Killarney

And the one anti-Orangeman ditty Tommy Makem remembered from growing up in County Armagh in Northern Ireland:

“Up the long ladder

And down the short rope

To hell with King Billy

And God bless the Pope

If that doesn’t do them

We’ll tear them in two

And send them to hell

…With their red, white and blue!”

So, if on your travels this December 26—St. Stephen’s Day—you come across a little wren, remember the Clancy-Makem song—and grant the poor bird a reprieve!

* Dermot McEvoy is the author of the "The 13th Apostle: A Novel of a Dublin Family, Michael Collins, and The Irish Uprising" and "Our Lady of Greenwich Village," now available in paperback from Skyhorse Publishing. He may be reached at dermotmcevoy50@gmail.com. Follow him at www.dermotmcevoy.com. Follow The 13th Apostle on Facebook at www.facebook.com/13thApostleMcEvoy.