Patrick Dexter and Gurdeep Pandher merge classical music with a traditional Punjabi dance in a heartwarming cross-cultural bridge across the Atlantic. 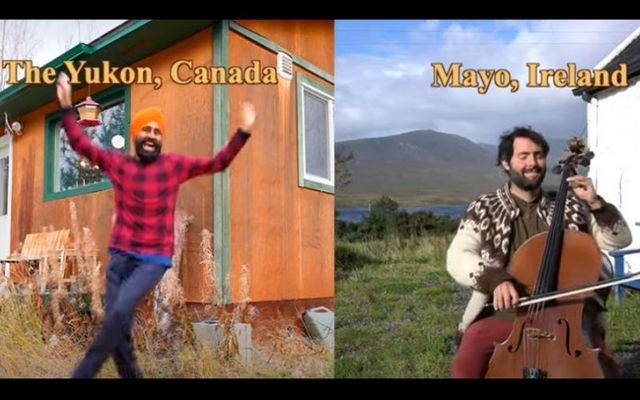 A cellist from County Mayo and a Canadian Punjabi dancer's cross-cultural collaboration video has gone viral- and we think you're going to love it!

Patrick Dexter, who lives in County Mayo, and Gurdeep Pandher, based in Yukon, Canada, have brought smiles to faces across the globe with their feel-good performance.

"We have a lot in common, so we decided to collaborate. Enjoy his cello music from his cabin in Mayo, Ireland, and my Punjabi Bhangra dance from my cabin in the Yukon, Canada," explained Gurdeep.

The side-by-side clip features Patrick playing a beautiful rendition of Bach while Gurdeep dances the Bhangra, a traditional folk dance of Punjab, to the music.

In the video, Gurdeep looks to his right to share a small wave with Patrick before he begins dancing, creating a heartwarming cross-cultural bridge across the Atlantic.

The clip was recently was shared on NBC Nightly News and was viewed across America.

Can't believe my cello playing was shown to over 7 million people on @NBCNightlyNews last Saturday with @GurdeepPandher wow! pic.twitter.com/GPJTMvjBvt

Classical musician Patrick Dexter is well known online for recordings of his breathtaking cello performances outside his rural cottage in County Mayo, with views of the rolling hills of the West of Ireland behind him.

Gurdeep Pandher rose to fame thanks to cheerful videos of him dancing the Punjabi Bhangra in unusual locations. His performances have even been shared by Canadian embassies abroad, showcasing the wonderful side of multiculturalism in the country.