P.J. (for Patrick Joshua) Conlon pitched a one-hit, seven-inning shutout for the Binghamton Rumble Ponies against the New Hampshire Fisher Cats on Saturday night in the second game of a doubleheader. 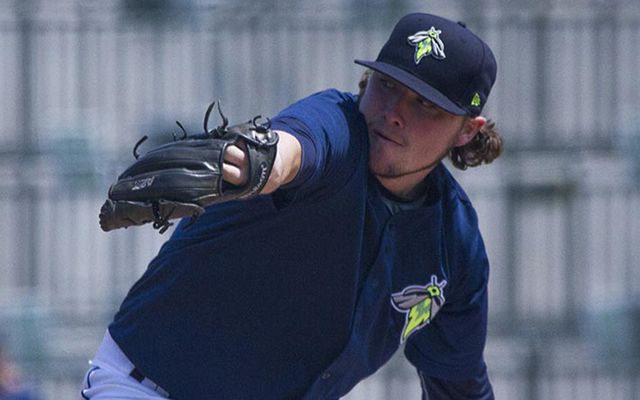 P.J. (for Patrick Joshua) Conlon pitched a one-hit, seven-inning shutout for the Binghamton Rumble Ponies against the New Hampshire Fisher Cats on Saturday night in the second game of a doubleheader. He struck out nine, while walking only one, as he lowered his ERA to 3.31. The 9-0 win brought Conlon’s record on the young season to 3-1.

Conlon, who was born in the Falls Road in Belfast but immigrated to the United States at a young age, is continuing his march through the New York Mets farm system. The lefthander was drafted by the Mets in the 13th round of the 2015 draft and has swiftly worked his way from rookie ball to the AA Eastern League, two levels removed from the major leagues.

He has been featured in The New York Times after IrishCentral wrote about him. He would be the first Irish-born player in the major leagues in well over a half century,

The only hit Conlon gave up was to Gunnar Heidt in the third inning. He finished the game with a flourish, striking out five of the last six batters. “I think everything started to click as the game kept going on,” Conlon said. “I was able to mix speeds and throw all my pitches for strikes. When I’m doing that, I think it’s tough for the hitters to be able to sit on a pitch, especially if I’m jumping out ahead.”

Conlon, like a lot of young pitchers, has been struggling with his mechanics. “I think I was thinking about mechanics too much during the game my last couple outings,” he said, “so this whole week leading up to this start I was telling myself whenever I got to the mound to just not worry about all the technical stuff and go throw. I haven’t really been able to get ahead of guys early the last couple of starts, so that was my main goal coming into this one. I was able to execute it pretty well.”

The Mets farm system is renowned for producing pitchers from the time of Tom Seaver and Jerry Koosman to present starts like Jacob deGrom and Noah Syndergaard. Last year, Conlon was so dominant at Low-A ball that he was promoted to High-A in the middle of the season where he continued to dominate. If he continues on his present path he could find himself in Las Vegas, the AAA team of the Mets in the Pacific Coast League, only a phone call away from Citi Field in New York. Conlon, who doesn’t have to be protected on the Mets 40-man roster until after the 2018 season, was, of course, thrilled with his performance: “It’s definitely a good feeling to finish the game out and be able to have a performance like that.”

Conlon, who was honored as the Mets Sterling Organization Pitcher of the Year for 2016, is definitely on the fast track to the major leagues. The way Mets pitchers are hitting the Disabled List this season, a few more performances like Saturday night could land Conlon in New York ahead of schedule.

Dermot McEvoy is the author of the "The 13th Apostle: A Novel of Michael Collins and the Irish Uprising" and "Our Lady of Greenwich Village", both now available in paperback, Kindle and Audio from Skyhorse Publishing. He may be reached at dermotmcevoy50@gmail.com. Follow him at www.dermotmcevoy.com. Follow The 13th Apostle on Facebook at https://www.facebook.com/13thApostleMcEvoy/