Hugh Jackman brought the Irish Tom Jones on stage, and gave a special shoutout to an "up and coming" Irish band during his second 'The Man. The Music. The Show.' tour stop in Dublin. 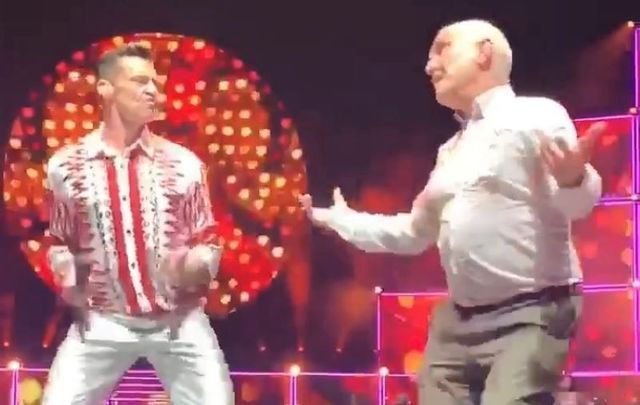 Hugh Jackman and the Irish Tom Jones shared a dance on stage in Dublin on Thursday. @RealHughJackman, Twitter

Hugh Jackman and his ‘The Man. The Music. The Show.’ tour are taking Dublin by storm

Hugh Jackman is in Dublin for his ‘The Man. The Music. The Show.’ worldwide tour and judging by the Aussie’s social media, he’s having the time of his life.

And who could blame him?

During Jackman's Friday night show at Dublin’s 3Arena, the second of three Irish shows, the actor brought an Irish fella up on stage by the name of Tom Jones.

The Irish Tom Jones had a chat and a dance with the Australian superstar on stage and the craic looks unbelievable:

Jackman also took the opportunity to send some good luck to an “up and coming Irish band” by the name of U2. Maybe you’ve heard of them?

Wishing this up and coming #irish band luck .... #aussieaussieaussie #dublin #tmtmts @u2

We can’t wait to see what else Jackman gets up to during his Irish visit.

Did you see Hugh Jackman in Dublin? Let us know in the comments!