What's in the bag, Harry Styles!? That's what everyone's asking as the pop star was pictured swimming at Vico Baths ahead of his sold-out show at Dublin's Aviva Stadium. 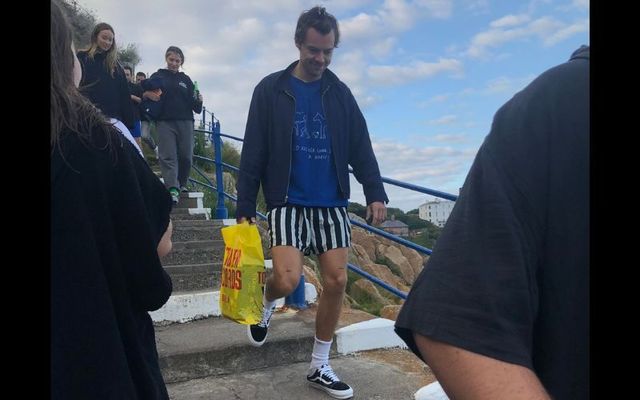 Harry Styles pictured with a Tower Records bag at Vico Baths in Dublin ahead of his sold-out "Love on Tour" show at Dublin's Aviva Stadium. @katelynhallows, Twitter

Harry Styles and his Irish American girlfriend Olivia Wilde have been spotted around Dublin ahead of the pop star's sold-out show at the Aviva on Wednesday night.

Styles joined the hardy swimmers at Vico Baths in South Dublin on Wednesday, taking on a brisk dip before he plays to tens of thousands of his Irish fans for the Dublin stop of his sold-out "Love on Tour" tour.

Interestingly enough, Vico Baths made headlines back in 2020 when another superstar, Matt Damon, was snapped there, famously carrying a SuperValu bag.

Now, Harry Styles, formerly of One Direction who is now in the midst of a successful solo career, has turned up at Vico Baths with his very own plastic bag, this one from Tower Records.

His appearance prompted Tower Records in Dublin to tweet: “What’s in @Harry_Styles’s Bag?”

The best guess? Cans of Guinness!

The regular swimmers at Vico tried to contain their excitement as the British superstar when for a casual dip. However, they did all have their cameras at the ready.

when you go for a swim in vico and meet harry styles... #HarryStyles @UpdateHLD pic.twitter.com/et2eVWBQ3a

The Vico Baths is definitely a top spot for the summer in Dublin - good choice, Harry!

Earlier in the week, Styles and his girlfriend, Irish American Olivia Wilde, were spotted in Dublin's City Center heading for a bite to eat at Sole.

Harry being a gentleman in Dublin today ? #HarryStyles #OliviaWilde pic.twitter.com/0H9g8rWnjS

Harry Styles and Olivia Wilde out in Dublin! pic.twitter.com/brkNEyvwi6

Wilde probably has lots of tips as she and Styles visit Ireland - the actress and producer spent her childhood summers in Co Waterford!