Ask anyone! There’s nowhere better in the world than Dublin when the sun shines in the summer. The streets are abuzz there’s always something to do and the possibilities are endless. 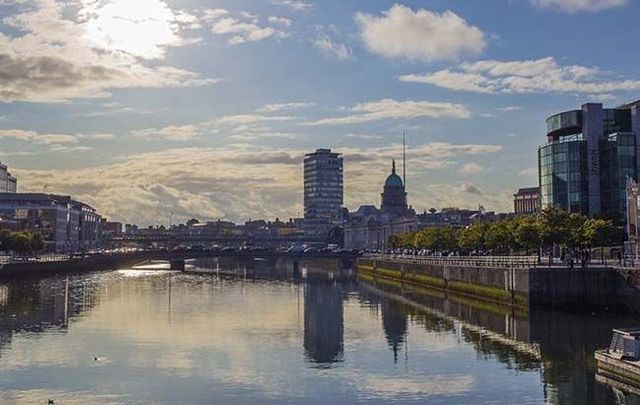 "In Dublin's fair city....": From getting out on the water to enjoy hill walks, fine food and history there's plenty to do in this buzzing town. iStock

Ask anyone! There’s nowhere better in the world than Dublin when the sun shines in the summer. The streets are abuzz there’s always something to do and the possibilities are endless.

Here are just a few ideas of how to pass a summer’s weekend in Dublin or if you’re a local maybe there are a couple of tips you never even considered.

Get off the tourist track, relax and take it all in like a local.

Howth is a beautiful fishing village just 10 miles north of Dublin city and conveniently on the DART (local light rail) line or accessible on Dublin Bus.

The walk around Howth Head is amazing. Just 30 minutes from the city center and you feel like you could be anywhere! Rugged cliffs, seagulls, stunning vistas of Ireland’s Eye. On a sunny day, it’s heaven.

The “full loop” of the head is about 8 miles and takes a little over 3 hours.

What better way of rewarding yourself for this physical excursion than with a hearty meal and some libations.

Howth is a fish-eating vacationer’s dream with oodles of really excellent fish restaurants (The Oar House and Aqua to name but two). Then if you’re looking for a fun and friendly pub head to the Bloody Stream, right next to the train station.

It was Darina Allen, the master chief from Ballymaloe in Cork, who brought this concept to Ireland. She had seen them work well in San Francisco and thought Ireland should have its own markets to display its fine farm produce and artisan foods.

These little markets, and some quite large are scattered around the county. Some of the most popular are Temple Bar, Dun Laoghaire, Howth, and Red Stables in Clontarf, to name but a few.

This is a great way to see Irish food at its best. From butcher vans to cheesemongers, vegetables straight from the ground to homemade cakes…if nothing else you’ll certainly pick yourself up a delicious lunch and see what the culinary side of Ireland has to offer.


Also known as SUP (stand-up paddle boarding) this is a relatively new sport to Ireland but it’s certainly going strong. Both in Grand Canal Docks and out in Dun Laoghaire over the summer months paddle boards can be seen, pottering about, taking classes, and even doing yoga on the boards.

Although you might think this is a difficult-looking sport, the boards are surprisingly steady and you’ll find your “sea legs” quickly. It’s certainly a serene and fun way to get a different perspective on Dublin.

Ireland’s City Bike system has been among the most successful in the world. So far there are 50,000 subscribers to the bike and just recently the City Council added more stations.

Now it’s possible to dock these bikes in every corner of the city center – from Talbot Street to Kilmainham Gaol and all the way to Ringsend - you can nip around with ease.

If you don’t fancy braving the city streets you can take yourself to Phoenix Park. Just minutes from O’Connell Street is Europe’s largest enclosed city center park. With 5.5 miles of bike paths, deer, the Zoo, the Irish President, and the US Ambassador’s home all housed inside this park you could happily spend a few hours cycling about.

Ireland is fast becoming a foodie hub of the world. Our chefs are now world-renowned and we’ve really put ourselves on the map when it comes to hearty, honest food.

The Irish Food Trail and Tapas Trail are the perfect tours to literally give you a taste of Irish food. The tour lasts for hours and you’ll visit Irish restaurants or pubs, accompanied by a local guide. Along the way, you’ll sample a selection of traditional and modern Irish food and drink and more importantly be immersed in Dublin culture.

This is my go-to tourist recommendation as it combines three priceless ingredients – literature, the old streets of Dublin, and its finest pubs.

It all kicks off at 7 pm in the Duke, on Duke Street (check the site below for details). You’re greeted by actors who perform snippets from Beckett, Brendan Behan, Oscar Wilde, and more as they guide you around some of Dublin’s best boozers. This tour is fun, pretty family-friendly, and more about the prose and banter than the drink.

Yup! You heard us. There is nothing like appreciating the Irish outdoors with some yoga classes and pop-up sessions that are happening all over Dublin. Again Dublin being blessed with a wealth of parks and occasionally with good weather, it seems like an obvious mix for us city dwellers or vacationers who need to relax.

From St Stephen’s Green to Dartry Square and Fairview Park it seems like pop-up outdoor yoga classes are everywhere.

Whether you plan actually trying your hand at flying a kite or you just want to get outdoors this is the place to be at the weekend. In 2015 Dollymount held its third annual Dublin Kite Festival and hundreds came to watch the masters at work.

If this seems too strenuous for you then maybe a stroll across the wooden bridge and along the three miles of Dollymount with views of Dublin Bay, from the Poolbeg chimneys to Howth.

If there’s one thing we’re not short of in Dublin is “the drink” and thankfully in recent years, there are various tour companies that have taken to the water.

There are the Viking Splash folks who drive amphibious WWII tanks around Dublin and then dunk them into the Grand Canal Basin and the Liffey. Don’t worry it’s all safe and life jackets are provided. What’s more, if you’ve kids with you they’ll love this. They’re even encouraged to shout at passersby and pretend to be a real-life Viking.

Then there’s the Liffey River Cruises that will bring you up and down the river from Bachelor’s Walk (near O’Connell Street) to the Docklands. A great way to get another perspective on the city. After all the Liffey is really at Dublin’s heart.

Then if you’d like to go further afield there are Dublin Bay Cruises which has boats that go from Howth to Dublin city center and out to Dun Laoghaire. What better way to pass a leisurely afternoon.

What many people visiting Ireland forget is that it’s actually a pretty small island. Our population is just 4.5 million and the island itself is just 302 miles long and 174 miles wide. What does this mean? Interesting day trips.

Two top trips from Dublin are Glendalough, in Wicklow, and the Titanic, Belfast.

Glendalough has it all. The ancient monastic ruins, beautiful countryside, and walking trails to suit everyone. It’s also quite close to Powerscourt House and Avoca. And all just an hour from Dublin city center too.

Belfast is just an hour and a half away from Dublin by train. Like Dublin, it has a reasonably compact city center which is easy to get around. I would recommend (having done it recently) taking a hop on hop off bus tour of the city which passes by the award-winning and brilliant Titanic museum. I would give yourself at leave 3 hours to get through all that’s on offer there.

Then if you’re looking for somewhere special to grab a bite before heading back check out Mourne’s Seafood.

If all that doesn’t inspire you to book a trip to Dublin then this gorgeous video, by Visit Dublin, certainly will: