Are Game of Thrones fans destroying the Dark Hedges of Northern Ireland?

Game of Thrones filming location the Dark Hedges is struggling to cope with the hordes of tourist the hit HBO show has drawn to the site. 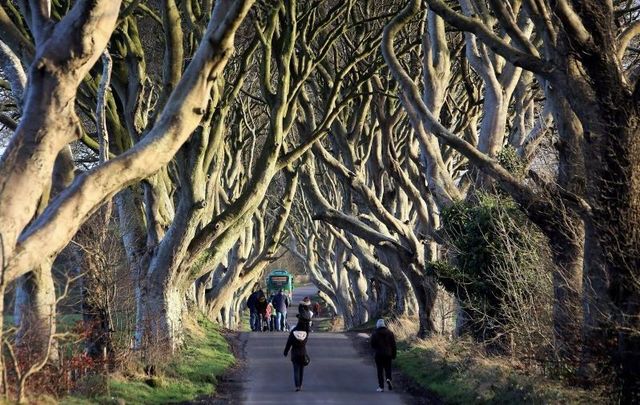 The Dark Hedges in Co Antrim, made famous by Game of Thrones, feels the strain of the boost of tourism Getty Images

As Game of Thrones fans flock to the Dark Hedges in Co Antrim, Northern Ireland, the area is feeling the strain.

The stunning location in Northern Ireland has fallen victim to traffic, litter, and even vandalism since being made popular on the hit HBO show Game of Thrones.

The trees in the Dark Hedges were planted 200 years ago by the Stuart family who were local landowners. They were little known outside the area until they featured in HBO’s Game of Thrones as the Kingsroad.

The Dark Hedges has been sealed off to traffic because of high tourist levels. Image: Tourism Ireland.

Read More: Game of Thrones show its love for Belfast as it says goodbye

Despite only being shown for around ten seconds, the Dark Hedges has become one of Ireland’s most visited tourist attractions and a traffic ban was instituted in 2017 in hopes of preserving the area, but police have had difficulty enforcing it.

The Dark Hedges as seen in Game of Thrones.

The decision by HBO to film Game of Thrones in County Antrim and County Down has delivered an unprecedented boost to local tourism.

Without factoring in tourism, filming alone is estimated to have brought £150 million to the local economy and pushed Northern Ireland’s fledgling creative industry to become a world leader.

The Dark Hedges is not the first Game of Thrones location to feel the strain of fan interest. Dubrovnik, which is the setting for Kings Landing on the show, recently had to cap the number of tourists allowed in each day.

Have you visited The Dark Hedges in Northern Ireland? Let us know in the comments!