WATCH: Moment foundling (50s) discovers his Irish mother is alive and wants to meet him

Andy Hallsworth was born "on or about August 31, 1965" and was left on the steps of the London church just six weeks later. 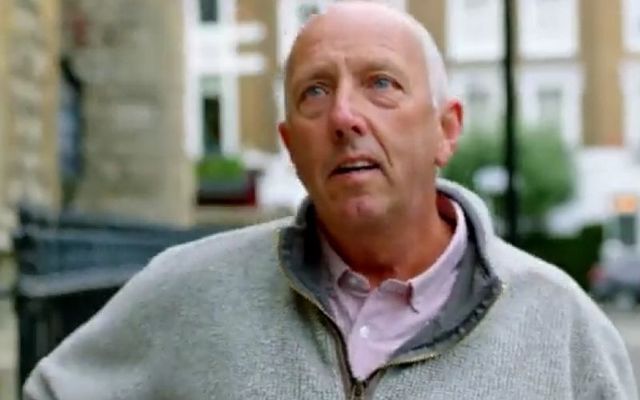 A 56-year-old man who was left on the steps of an English church when he was a baby by his Irish Catholic parents has discovered that his birth mother is still alive.

Andy Hallsworth was born "on or about August 31, 1965" and was left on the steps of the London church just six weeks later.

His parents, who conceived him out of wedlock, abandoned him in the English capital to avoid becoming outcasts in their religious families even though they were married six months into the pregnancy.

Hallsworth was discovered on the steps of the church and later adopted and grew up oblivious to the fact that he had been abandoned as a baby.

He later discovered that he was a foundling when he was questioned about his medical history before the birth of his first child.

Hallsworth turned to the BAFTA-winning series Long Lost Family to find his birth parents and eventually tracked down his mother with the help of DNA testing.

He also discovered that he was the eldest of eight children and that his birth father sadly died in 2009.

Hallsworth returned to the steps where he was abandoned during the episode, revealing that his name was once David Sutherland because he was discovered close to Sutherland Place.

"Thinking of my mum maybe coming down this road and putting me here, seems like a really lovely church and she must have thought I want someone to find him," Hallsworth said during the episode of Long Lost Family.

He said he "never really thought about" being adopted when he was growing up, adding that it didn't bother him.

However, he was forced to confront the issue when his wife was pregnant with their first child after doctors asked him for his medical history.

"Dad was very upset when he told me, 'you were an abandoned baby, you were found on the steps of a church'," he said.

Hallsworth said he didn't even have a birth certificate at the time, leading Long Lost Family researchers to track it down.

The birth certificate revealed that Hallsworth was born in August and that he was found on October 22, 1965.

"That's amazing, but that means I was with my mum... that means she looked after me for two months," he told the show.

"You know you think to yourself what was she going through, struggling from the end of August to the end of October and to have given me up, it must have taken a lot."

Hallsworth traveled to Ireland to meet his 82-year-old mother, who did not wish to be identified.

He revealed that he had a "really nice" conversation with his mother, adding that they talked for three hours.

"She said it was a terrible feeling what she had done and what she had to do but there was no way she could've come back here with a baby, she would've been banished and outcast, which I completely understand.

"But they had thought about me all through their lives and quietly wondered what had happened and that's really good to know. It was so nice to tell her I had a happy childhood."