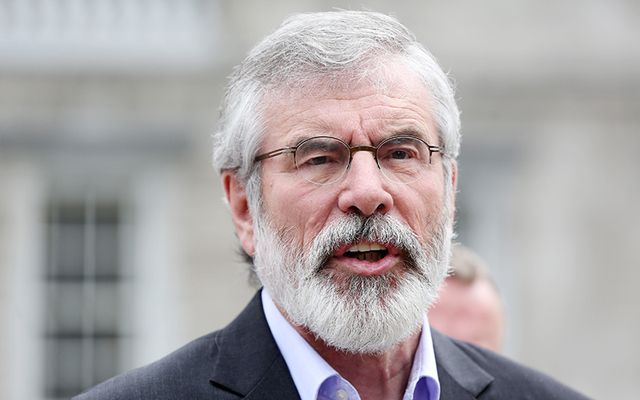 The first trailer has just been released for the much-anticipated Jackie Chan movie “The Foreigner” featuring Irish actor Pierce Brosnan sporting a look which is remarkably similar to one of Ireland's most widely known politicians.

When the first shots from the film were released last year, social media went wild for the uncanny resemblance between Brosnan and Sinn Féin President Gerry Adams. While the Co. Meath-born actor’s character in the film, Liam Hennessy, is a former IRA leader turned politician, it is said that any resemblance to Adams is purely coincidental and not meant to insinuate anything about Sinn Féin leader and his possible links to any acts of terrorism in the past.

Despite stating that he would never totally disassociate himself from from the IRA, and at times failing to condemn violence committed by the IRA during the Troubles, Adams, 68, vehemently denies he was ever a member himself.

Adams enjoyed the similarity between himself and Brosnan when the images first emerged last year.

I never knew Pierce Brosnan was so good looking.

The film will reunite the Meath man with director Martin Campbell 20 years after he worked with him on “Goldeneye.” Brosnan played Bond in four movies made between 1994 and 2005.

“The Chinaman,” published in 1992, tells a fictional tale of revenge akin to that of Liam Neeson in “Taken.” Nguyen Ngoc Minh fought for the Viet Cong and witnessed the rape and murder of his two eldest daughters before his now peaceful life as a takeaway business owner in South London.

When his youngest daughter is killed in an IRA bombing, Ngoc Minh promises that those responsible will be brought to justice.

Hounding Brosnan’s character Hennessy, an Irish MP charged with impeding an investigation into the bombing, Nguyen mounts his own campaign of terror against those responsible for his daughter’s death.

For fans of Liam Neeson’s “Taken,” this looks like another rip-roaring jam-packed film with 63-year-old Jackie Chan not letting up on the action, despite now being in his seventh decade. He was a well-deserving recipient of an honorary Oscar last year for his incredible stunt-filled career.

What do you think of the similarities between Pierce Brosnan and Gerry Adams? Let us know in the comments section, below.