Liam Neeson is “Taken” by invite from sandwich shop 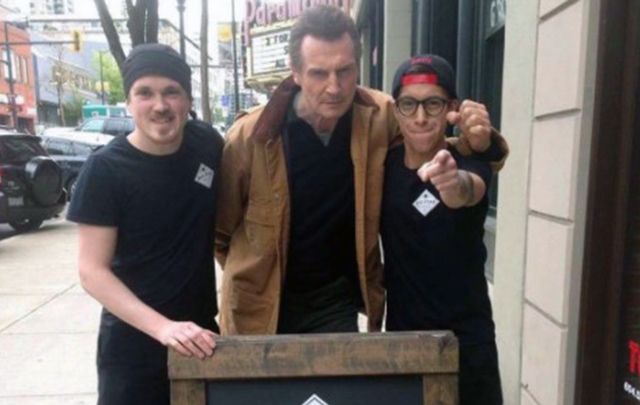 Staff at a British Columbia sandwich shop were bowled over when their cheeky sign reading “Liam Neeson eats here for free” worked and the Northern Irish star walked into the shop and in his trademark gruff voice asked, “Where's my sandwich?"

Always the crowd-pleaser, Neeson is currently filming the thriller “Hard Powder” in New Westminster, BC. The folks at Big Star Sandwich Company thought they’d use their store front chalk boards to try and entice the Irish movie star into their shop.

Charmed that the Irish star took time out to call by the sandwich shop, Johrden is hoping that their new menu item, named after Neeson, will lure him back.

Johrden explained why they named this meaty spicy sandwich after Neeson. “It has a lot of beef, a one-two punch of bacon and hickory sticks and spice that will get revenge on you tomorrow."

Neeson’s “Taken” character Bryan Mills has a lot to answer for!

Today's feature is the Neeson! Lot's of beef, a one-two-punch of bacon and hickory sticks, and spice that'll get revenge on you tomorrow! #AlwaysHearty #SandwichLife

Johrden also said that as British Columbia’s film industry is booming and serving Hollywood stars has become a regular thing. However, he added that Neeson is the biggest celebrity they’ve had in the store.

He said, “This is about the most A-list star we've ever had, but in the area, we've had Elijah Wood and the like.”

Apparently, Frodo from “Lord of the Rings” does not trump this Irish star!

Neeson, who was born in Ballymena, County Antrim, is in the area filming “Hard Powder.” In the movie, set for release in 2018, Neeson plays the character of Nels, a snowplow driver seeking revenge against the drug dealers he thinks killed his son. The movie is based on a 2014 Norwegian movie, “In Order of Disappearance.”

The movie has already been in the news in Canada after Parks Canada denied crews permission to film in Alberta’s mountains. Their reason was to do with the plot and one of the characters, an indigenous gang leader.

Here’s the local news report on Neeson’s visit to the sandwich shop: