Eve Hewson's star-making role has arrived in 'Behind Her Eyes'

The Irish actress plays a rich, pill-popping and psychologically-disturbed London wife in the six-part thriller series. 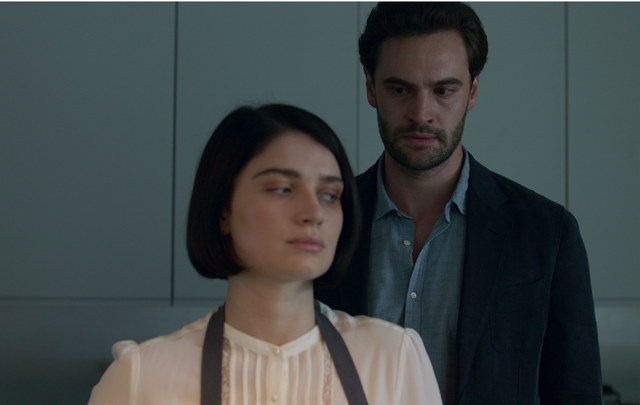 A shot from "Behind Her Eyes" starring Eve Hewson and Tom Bateman. YouTube/Netflix

In the mood for a truly creepy but strangely addictive psychological horror on Netflix?

Eve Hewson has you covered. In "Behind Her Eyes" she plays a rich, pill-popping and psychologically-disturbed London wife with more secrets than a ballroom full of debutants.

The story begins slow-burn style with a single mother called Louise (the gifted newcomer Simona Brown) who meets a nice man named David (Tom Bateman) in a bar after being abruptly stood up by her flaky friend.

There's immediate chemistry between the pair and they soon exchange intimacies, which leads to a passionate kiss outside the pub. But David suddenly loses heart and tells Louise he “can't do this.” She's crestfallen and left wondering who he is and what that was all about. 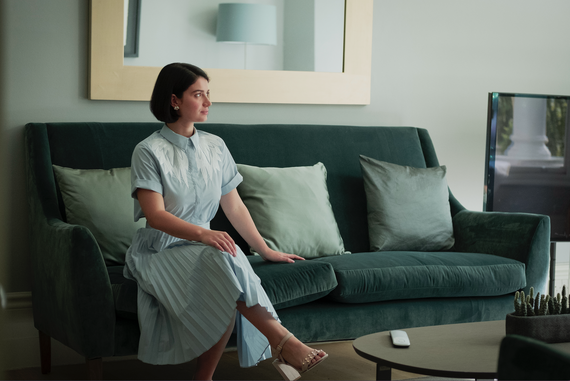 But she doesn't have to wonder for long. The next day at work she discover that David will be her new boss and that he's brought along his wife Adele (Hewson) to have a look around his new office.

Louise sees them first and hides in the bathroom (like you would) to avoid any misunderstanding, but she can't believe her bad luck. She's secretary to the married man who tried to pick her up the night before, and she's mortified by the unease it creates.

The first give is away about Hewson's dangerous new character is her 1920's style black bob. It practically shouts “I'm a handful” and when Louise finally meets her, she's as aloof as her position allows.

But Adele is the boss's husband and she can't afford to make her an enemy, so Louise reluctantly agrees to accompany her to the gym when Adele tells her she's new to the neighborhood and could use a buddy.

What makes the show so weirdly compelling is Hewson's obvious delight in playing a deeply untrustworthy potential sociopath who looks at people like she's about to either embrace or stab them. With her cornflower blue eyes and thousand yard stare, she's clearly having the time of her life playing an upper-crust basket case who may or may not have murdered her own parents (more on that in a moment).

It is always terrific to watch an Irish actor find their breakthrough role, and in "Behind Her Eyes," this is Hewson's. It's not a stretch for her to play a pampered heiress, but to play one who might "Fatal Attraction" you in the next scene makes this six-part series a white knuckle ride you'll enjoy taking.

In Simona Brown, Hewson has found the perfect scene partner. Both women are ideally cast --  Brown as the open but not too open heroine and Hewson as the good girl or possibly bad girl who may or may not have a serious screw loose. 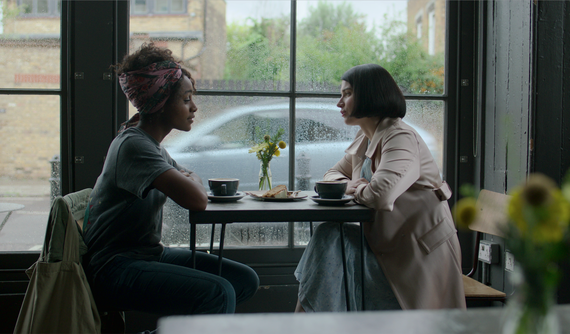 Eve Hewson and Simona Brown are sensational in Behind Her Eyes

Hewson is of course the daughter of Bono of U2, and she's obviously well used to palatial homes and Architectural Digest-style interiors. What we have not seen from her before is how much fun she can have and deliver when a show that plays to every one of her strengths as an actress, adding more of her own as the show goes on.

I must admit I felt like I was seeing her for the first time, but that's because this carefully plotted and directed show gave her scope to play a character who, although she loves her husband, is completely and arrestingly independent and just a little bonkers (or is she?)

What is the tie that binds Adele to David, although it seems the spark between them has gone? Is it a murder pact? Is it to protect one or the other from justice? Is there something supernatural in their union?

I can tell you the buzz about this show and its ending will light up social media when it debuts on Netflix later this week, but the real news is that it's Hewson's long-awaited star vehicle. She's going to be all the talk.