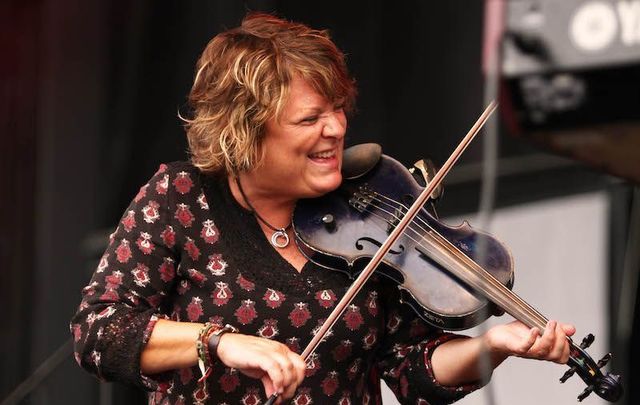 Eileen Ivers, nine-time All Ireland Fiddle Champion and Grammy Award winner,  performed via live stream on April 16 for fans around the world.

Eileen Ivers, a critically-acclaimed fiddler, performed an evening of energetic and joyful Irish and Americana tunes via a live stream from CalTechLIVE during the coronavirus crisis.

You can watch back on the live stream right here on IrishCentral as part of the IrishCentral Happy Hour series.

The live stream event comes after Ivers’ scheduled concert at CalTech was forced to be canceled in light of the coronavirus crisis. The Irish American fiddle extraordinaire had a number of performances lined up in celebration of the release of her latest album, “Scatter the Light.”

Of the event, CalTech says: “Eileen and her husband, Brian, have created a special program for us all. It will be a very special look at Eileen's music-making in a way that, honestly, wouldn’t be possible on a concert stage.”

Ivers is a 9-time All-Ireland fiddle champion, and one of the most awarded All-Ireland Fiddle and Banjo champions ever. In a career that has spanned over 30 years, Ivers has performed and/or toured with such diverse artists as Sting, Patti Smith, Al Di Meola, Hall and Oates, and The Chieftains. She has guest-starred with the London Symphony Orchestra, Boston Pops, and over 50 symphony orchestras to date. She was the musical star of the groundbreaking “Riverdance” and a featured instrumentalist on “Back to Titanic” and film soundtracks including “Gangs of New York.”

Eileen was featured in Riverdance's first US television appearance in 1996 on "The Late Show with David Letterman:"

Eileen has been proclaimed “a national treasure” by NCTA Board Chairman George Holt as she celebrates her renowned career as a performer, composer, producer, songwriter, bandleader, educator, multi-instrumentalist and revered pioneer in connecting her American, Irish traditional, jazz, blues, and world roots.

She's been called a "sensation" by Billboard magazine and "the Jimi Hendrix of the violin," by The New York Times. "She electrifies the crowd with a dazzling show of virtuoso playing" says The Irish Times.

The L.A. Times proclaims, "Ivers' presentation was music with the kind of life and spirit that come together when talented artists from different backgrounds find the linkages that connect all forms of music...no wonder the audience loved every minute."

Eileen’s new CD of predominantly original music, “Scatter the Light”, was released on March 13, 2020. The album consists of original songs and tunes reflecting positive aspects of life and human nature, finding moments of JOY and gratitude ...even in the light of life’s struggles. The recording follows Eileen’s previous release “Beyond the Bog Road”, which focused on the influences of the Celtic tradition on Roots music (bluegrass, French-Canadian, Cajun, Appalachian, Americana). Irish Music Magazine called it “a triumph …a musical Magnus-Opus” and the album reached number one on the Alt-Country Roots Music Chart.

Do you want to be featured in IrishCentral's Happy Hour live stream series? Email us at Editors@IrishCentral.com with the subject line "Happy Hour"!