Ed Sheeran, who is about to kick off his "Mathematics" world tour with 10 shows in Ireland, showed off his pint-pulling skills at Fitzgerald's of Sandycove in Dublin. 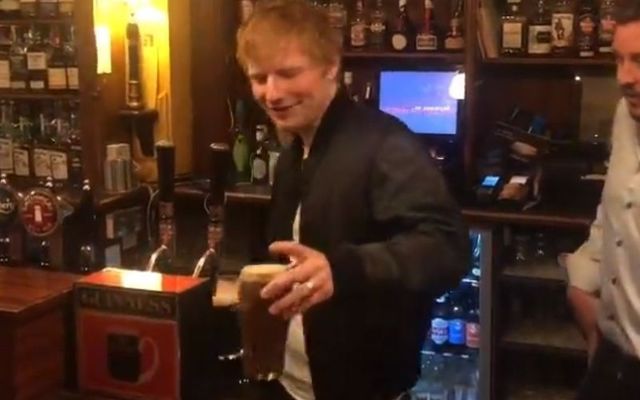 Ed Sheeran pulls a "pretty perfect pint" of Guinness at Fitzgerald's of Sandycove in South Dublin ahead of his 10 Irish shows for his "Mathematics" tour. @SooCoDu, Twitter

Ed Sheeran is in Ireland ahead of his much-hyped run of shows in Dublin, Cork, and Belfast, and stopped into Fitzgerald’s of Sandycove in Dublin on Monday night to pull a "pretty perfect pint of Guinness."

"Ed Sheeran is our newest recruit here in the pub," Fitzgeralds of Sandycove said in a cheeky Facebook post on Monday night.

The owner of the South Dublin pub told RTÉ Drivetime on Tuesday: “Where’d ya get it?”

“He’s a really lovely guy, yeah. Just a normal lad. Pulled a pretty perfect pint of Guinness, I have to say.”

Ed Sheeran pulled the perfect pint of Guinness last night in Sandycove, Dublin. ?
Our @drivetimerte reporter @BarryLenihan spoke to the owner of Fitzgerald’s ahead of his gig in Whelan’s tonight ?? ? pic.twitter.com/KczltVsxg5

Clips and pics of Sheeran pulling the perfect pint circulated on Twitter on Monday night.

So gutted to have missed Ed in @fitzsandycove last night!!! ?? And of course he dined in style in @RasamRestaurant first!! #EdSheeran pic.twitter.com/mDr3hrc36O

So the one night ya don't go for a glass in your local #edsheeran @fitzsandycove pic.twitter.com/ZjzpJiLKGj

According to Goss.ie, Sheeran got in a bit of grub at Rasam Restaurant, which serves authentic Indian cuisine, in Glasthule on Monday night before heading for some pints.

Hopefully Sheeran didn’t overindulge as he’s about to kick off his ten-show Irish run for his "Mathematics" tour tonight, April 19, at Whelan's in Dublin! That's followed by a gig at Vicar Street, also in Dublin, on April 20.

Sheeran is then set to take on Dublin's Croke Park on April 23 and 24, Cork's Pairc Ui Chaoimh on April 28 and April 29, Limerick's Thomond Park Stadium on May 5 and May 6, and then Belfast's Boucher Playing Fields on May 12 and May 13.

Sheeran has confirmed that he will be joined by Irish-Zambian musician Denise Chaila and English musician Maisie Peters for his Irish shows:

Though British, Sheeran, whose grandparents are from Belfast and Wexford, has previously said that he comes “from an Irish family” and that he “spent most of my childhood summers and birthdays and Christmases in Ireland listening to trad music bands.” That Irish influence is apparent in several of his songs, most notably his take on "Galway Girl" and the original "Nancy Mulligan."