Star of “Teen Wolf” and “The Maze Runner,” movie icon Dylan O’Brien is returning to the big screen after a life-altering accident on set. 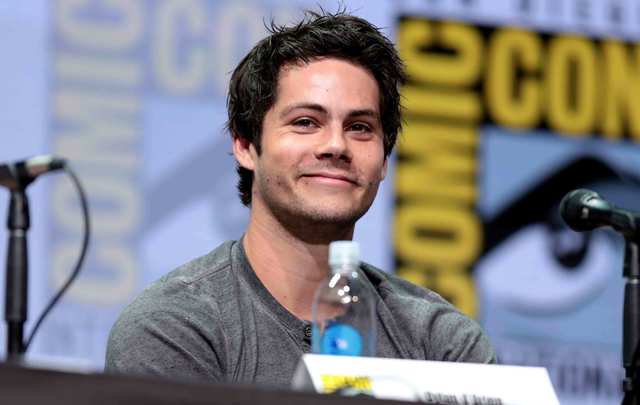 With the announcement that Liam Neeson is retiring from making action movies, the Irish really need another young actor to take his place. While the likes of Jack Reynor (who already appeared in the “Transformers” franchise) and Barry Keoghan (“Dunkirk”) are tipped big for Hollywood success, is it Dylan O’Brien who could become the new hot young Irish American leading man?

Despite an accident on set last year that left him with a severe injury, Dylan O’Brien is returning to the movie business in 2017, appearing in “American Assassin,” (released today). While the “The Maze Runner” star already has legions of young female fans, he may be less well known to those of us who didn’t tune into MTV’s “Teen Wolf.”

To get you up to speed here’s all you need to know about the career of Dylan O’Brien to date:

Who is Dylan O’Brien?

Dylan O’Brien is a New-York-born actor and the son of former stage actress Lisa Rhodes and Patrick B. O’Brien, a camera operator. O’Brien was raised in New Jersey before his family made the move across the country to California when he was 12 years old. Having originally planned to study cinematography and follow in his father’s footsteps, O’Brien ended up in a community college before dropping out when he landed his first major TV acting role just a few short weeks out of high school at the age of 18.

When he was 14 O’Brien had begun making comic shorts that he posted to his personal YouTube channel, winning him the attention of a local producer and director with whom he worked on a web series while in his senior year of high school.

He is currently in a relationship with actress Britt Robertson whom he met on the set of “The First Time.”

How old is Dylan O’Brien?

How does Dylan O’Brien have Irish roots?

While his mother Lisa Rhodes is of English, Spanish, and Italian descent, O’Brien’s father Patrick O’Brien is of Irish descent (which should come as a surprise to nobody with a name like that).

What are the names of some Dylan O’Brien movies?

O’Brien first hit the big time winning the role of goofy sidekick Stiles in MTV’s “Teen Wolf,” a loose adaption of the 1985 movie of the same name. Starring in the hit show between 2011 and its end in 2017, the actor won a legion of adoring fans.

He had originally been intended to play the show’s main character Scott, but after reading the show’s script, decided that Stiles was more his style. He was cast after four auditions for the role.

In 2011, he also appeared in the improvised, independent comedy film “High Road” and the following year starred in “The First Time” opposite his girlfriend Britt Robertson.

He acted in “The Internship” alongside Vince Vaughn and Owen Wilson in 2013 before landing his biggest role to date as the leading character in teen hit “The Maze Runner.” As the fourth highest-grossing film series based on young-adult books, “The Maze Runner” catapulted him even further into star status with his young fans, winning him a host of Teen Choice Awards and MTV Movie Awards for it and for its sequel “Maze Runner: The Scorch Trials.”

Read more: Are these the best Irish actors of all time?

What about that infamous Dylan O’Brien injury and the accident he suffered in 2016?

Unfortunately, during the filming of the third and final movie in “The Maze Runner” franchise, “The Maze Runner: The Death Cure,” Dylan O’Brien was seriously injured when a film stunt went wrong and he was reportedly flung from a harness on top of one vehicle into the vehicle directly behind. The injuries he suffered in that accident included "concussion, facial fracture and lacerations." His life was never threatened, but he did require significant time to recover, leading to delays in filming.

O’Brien endured massive reconstruction surgery, resulting in the four metal plates holding one side of his face together and fears that the trauma of the accident, emotionally and physically, could bring an end to his acting career.

“I didn’t really wake up or become cognizant, in a way, for a good six-to-eight weeks after it happened,” O’Brien explained to the LA Times.

“And then I entered a really difficult phase. I just wasn’t the same person. Things happen to you after something like that that you just don’t have any control of. Your body is designed to react in a way to protect itself if you have a severe trauma to your brain.”

After a year out of the public eye recovering and recuperating, the final "Maze Runner" film is now set to be released in early 2018.

Before he returns in “The Maze Runner,” however, O’Brien will hit our screens this year as the lead in “American Assassin” alongside Michael Keaton, which is being released today (Sep 15).

Based on the best-selling Vince Flynn books, he will play Mitch Rapp in the action thriller, a Black ops recruit seeking revenge after witnessing his fiance being shot down by terrorists.

Having signed up to "American Assassin" just a few weeks before his accident, O’Brien had hoped that after "Maze Runner" and "Teen Wolf," the movie would launch a new, more adult era in his career, but this was all put on hold while he recovered from his injuries.

“I hid for a long time, obviously. I was going through a lot and didn’t want anybody to see me going through that, I guess,” he explained to the LA Times.

“But I’ve gotten to an OK place of talking about it all. I’ve had to come to terms with people asking me about what happened.”

He believes, in fact, that the anger about his accident was helpful in reaching the anger felt by his character Rapp.

“It felt like this version of me at the time, always trying to hide from people,” he says.

“I was in a really dark place. Obviously, I didn’t experience what he goes through, but that summer when I was in recovery, I was going through a lot. Funny enough, I felt so deeply connected to the dude, and I don’t think I would have known how to play him if this hadn’t happened.”

O’Brien has also revealed that to keep him going through some of the tougher scenes in the film, his camera-operator Irish father had been hired on the crew and was on hand to lend him support.

Will Dylan O’Brien now return to the “The Maze Runner” movies?

Yes, O’Brien went back to film the remaining episode of "Maze Runner" after he had finished “American Assassin” and the movie is due to be released next year.

Will Dylan O’Brien be Irish America’s next biggest star?

It remains to be seen whether “American Assassin” will swing Dylan O’Brien into permanent leading man status, but we certainly have high hopes!

Is Dylan O'Brien our new hot young Irish American leading man? Let us know your thoughts in the comments section, below.