May 25 is National Tap Dance Day! Watch as these two priest battle it out - tap dance versus Irish dance - at a fundraiser in Rome. 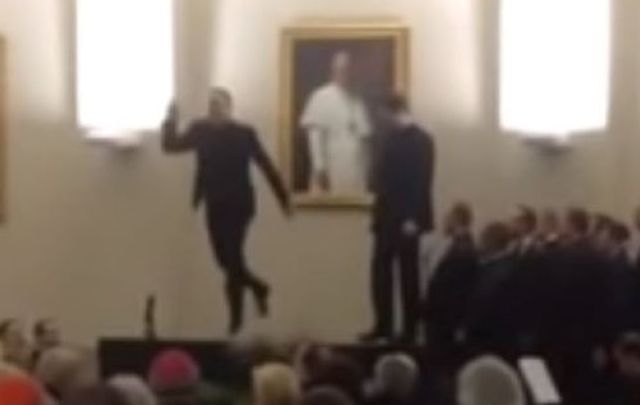 Will tap or Irish win in this dance battle? YouTube

May 25 is National Tap Dance Day! Watch as these two priest battle it out - tap versus Irish dance - at a fundraiser in Rome.

Reverend David Rider (29), of Hyde Park, New York, and Reverend John Gibson (28), from Milwaukee, became internet hits when they were filmed in April 2014 dueling in a dance battle near the Vatican.

The dance-off, which featured Irish dancing versus tap dancing, was put on before an audience at a fundraising event at the North American College, an American seminary in Rome.

First on stage (atop a piano by the looks of things) is Rev. Rider warming up the crowd with some tap dancing. Then, Rev. Gibson takes to the stage with some seriously fast-footed Irish dance moves.

Journalist Joan Lewis recorded the dance duel from the back of the room. She told the Associated Press she was blown away by the reaction online. Currently, the video has been viewed over 3 million times.

Not all the reaction to the video was positive. One commenter said they should not have been dancing under a crucifix and a painting of Pope Francis I. They called their dancing “disrespectful.”

In response to the comment, tap-dancing Rev Rider said, “We would just refer them to the Bible where the Lord tells us to live with joy."

John Gibson was ordained a Catholic priest in May, in Milwaukee. He was a former dancer with Cashel Dennehy School of Irish Dance, also in Milwaukee.

According to the Catholic Herald Gibson began his Irish dance career at the age of 12. He was “number one in the Midwest after winning the regional championship one year. During his eight or nine-year dance career which ended when he was in college, he also placed in the top 10 in nationals and in the top 15 in world championships.”