The Donkey Sanctuary Ireland has invited Colin Farrell for a visit as he continues to give "props" to his "Banshees of Inisherin" co-star Jenny the donkey. 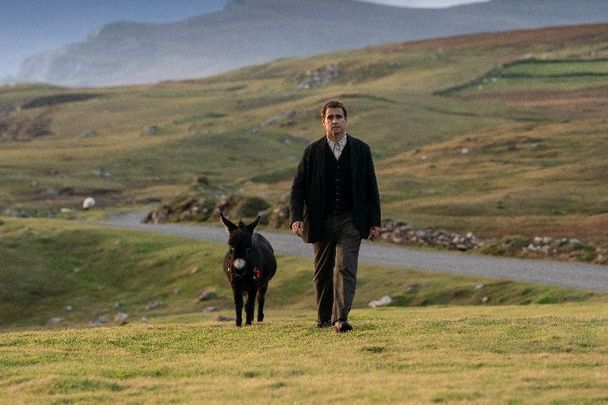 Colin Farrell and Jenny the donkey in "The Banshees of Inisherin." Jonathan Hession / Courtesy of Searchlight Pictures. © 2022 20th Century Studios All Rights Reserved

Colin Farrell is receiving heaps of praise for his role in “The Banshees of Inisherin,” and he’s making sure to include his co-star Jenny the donkey in all of the buzz.

In "The Banshees of Inisherin," Jenny the donkey ends up playing a hugely emotional role, so much so that Farrell even gave Jenny a shout-out in his heartwarming Golden Globes acceptance speech on January 10:

Elsewhere, Farrell said in a special behind-the-scenes featurette: "Jenny was a scene stealer!"

Now, the Donkey Sanctuary Ireland, based in Mallow, Co Cork, has extended an invitation to Farrell to pay a visit.

Laura Foster, Donkey Sanctuary Ireland’s country manager, recently told The Echo that she wrote to Farrell's representatives in the US "just to say thank you first and foremost for all the wonderful commentary he’s given in interviews around Jenny the donkey and the props that he gave her during his acceptance speech at the Golden Globes and all of that, but also just to say if he was ever back home and fancied visiting us we would love to welcome him down to the Sanctuary."

Foster acknowledged that Farrell is “probably very busy,” but that she and the Sanctuary crew “live in hope” of a visit from the Golden Globe winner.

“We’re a humble site," Foster said, "we don’t have red carpet facilities, but we would certainly give him the best possible experience if he were to visit and it would just help us reach so many more people and help us educate more people about donkey welfare off the back of the movie.

“It would be fantastic.”

We've loved Colin Farrell's anecdotes of working with Jenny the donkey on #BansheesOfInisherin Jenny & Rosie are like all donkeys, who need a close friend (we call them bonded companions) to help them through life. We think Jenny deserves one of those Golden Globes! https://t.co/i0hPCOYcr1

Speaking to the Irish Examiner, Foster explained how the popularity of Jenny the donkey thanks to "Banshees" could lead to a 'surge in donkey ownership.'

“I would encourage people who might want a donkey to call us for advice," Foster said. "We do have donkeys ready for rehoming but only for the right people."

The Donkey Sanctuary Ireland responded to 905 calls to help donkeys last year — 26% more than in 2021 — and rehomed 160 donkeys, the Irish Examiner reports.

You can learn more about Donkey Sanctuary Ireland, including how to visit and how to support its mission, on its website.