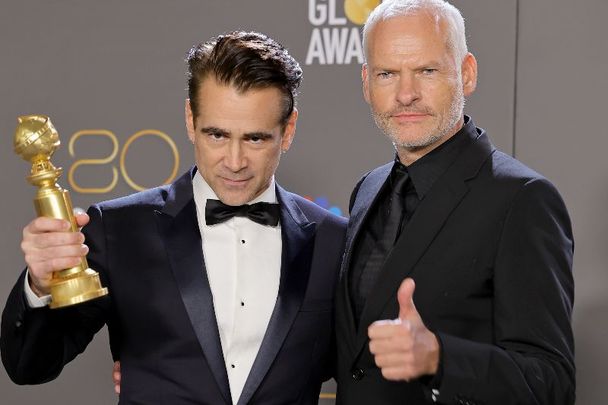 January 10, 2023: Colin Farrell and Martin McDonagh, winners of Best Picture - Musical/Comedy for "The Banshees of Inisherin", pose in the press room during the 80th Annual Golden Globe Awards at The Beverly Hilton in Beverly Hills, California. Getty Images

"The Banshees of Inisherin" won three awards at the 2023 Golden Globe Awards which were hosted on Tuesday, January 10.

"The Banshees of Inisherin," which was poised for success heading into the 80th Golden Globe Awards with eight nominations, walked away with three wins, a strong indicator that the distinctly Irish film could be bound for Oscar success.

Farrell scooped his second-ever Golden Globe award on Tuesday night. The Dublin native won his first Golden Globe back in 2009 for his role in "In Bruges."

In his heartfelt acceptance speech, Farrell thanked Martin McDonagh saying, "I owe you so much. 14 years ago you put me working with Brendan Gleeson, my dance partner, and you changed the trajectory of my life forever in ways that I, begrudgingly, will be grateful to you for the rest of my days."

Farrell said he was "horrified by what's happened around 'Banshees' over the last couple of months in a thrilling kind of way."

Turning to his co-star and friend Gleeson, Farrell said: "All I did when I came to work every day was aspire to be your equal. I'm not saying I even got there, but the aspiration kept me going."

Farrell also thanked his co-stars, Kerry Condon, whom he described as "extraordinary," and Barry Keoghan, who he ribbed for stealing his cereal during filming.

Of course, the unexpected star of the film, Jenny the donkey, got a special shout-out, as did Farrell's two sons, whom he called "the loves of his life."

Later in the evening, Martin McDonagh also picked up his second-ever Golden Globe award - he previously won the Best Screenplay award for "Three Billboards Outside Ebbing, Missouri" in 2018.

In his speech, McDonagh joked: "As some of you may know, I wrote this script for the stars of my film, Jenny the donkey and Minnie the horse."

Joking aside, McDonagh said he wrote the film for Farrell and Gleeson, whose performances "just blew me out of the water, as usual."

"I love you, you know, for your brilliance on-screen and your kindness off-screen," McDonagh said to Gleeson and Farrell, "And I'll try and not leave it another 14 years til I do the next one with you."

McDonagh also thanked Condon and Keoghan, saying: "Barry a new friend who almost stole the movie, and Kerry an old friend who did steal the movie."

Martin McDonagh wins the award for Best Screenplay for a Motion Picture for The Banshees of Inisherin. #GoldenGlobes pic.twitter.com/RKjGpuroAL

"The Banshees of Inisherin" wins Best Picture, Musical or Comedy

Flanked by the film's cast, McDonagh and "Banshees" producers Graham Broadbent and Peter Czernin took the stage to accept the final award for the Irish film for the evening.

"We had a very happy time making this film in Ireland," Broadbent said. "We're still friends at the end of it, we still speak to each other, which is a good thing."

The Banshees of Inisherin wins the award for Best Musical or Comedy Motion Picture at the #GoldenGlobes. pic.twitter.com/QpA9zcn9k8