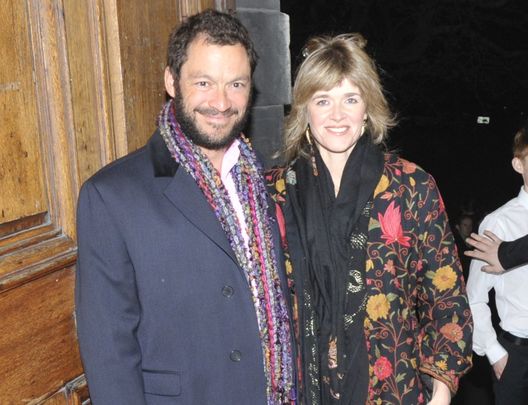 Dominic West arriving to an event at Trinity College Dublin with his wife Catherine Fitzgerald, in 2011. RollingNews.ie

British actor Dominic West starred in the popular Showtime drama The Affair, and now, if we are to believe our eyes, it seems like he’s having one with an actress a good bit younger than his wife, Irish designer Catherine FitzGerald.

The Wire star, Dominic West is still married to Catherine FitzGerald, an Irish landscape designer and member of the aristocratic FitzGerald family which owns Glin Castle in Co Limerick where she was raised.

Photos published by the Daily Mail on Monday showed West, 50, all over his newest co-star, Lily James, 31, in Rome as they dined together, rode a scooter together, and didn’t seem to care who noticed. A photog was on hand to photograph their afternoon.

Seems we’ve got shades of Noah Solloway (his character from The Affair) and the younger girl, this time in real life. FitzGerald, according to a friend who spoke to the Daily Mail, was “devastated” by the pictures.

“Catherine has been trying to speak with Dominic but he's not answering his phone. She's totally shocked because she didn't know anything was going on. They were very much together, so this is completely out of the blue,” the pal added.

On Tuesday, however, the couple addressed reporters outside of their home and handed out a handwritten note which read "Our marriage is strong and we're very much still together. Thank you" and is signed by both Catherine and Dominic.

Dominic West and wife Catherine Fitzgerald addressed reporters outside their home today by speaking to them and handing out pieces of paper saying: “We just want to say our marriage is strong and we are very much still together.” pic.twitter.com/f1gomwise8

West LOVES Ireland, especially Glin Castle which he actually co-owns with his wife of 10 years Catherine, mother of four of his five kids.  The couple showcased Glin, an 18-bedroom castle which is available for private hire, in a spread for Architectural Digest last year.  “I was really struck by the romance of the place,” he said.

In 2016, West, who attended Trinity College in Dublin, made his way to Ballybunion in Co. Kerry to mark the 100th anniversary of the Irish Proclamation.